Women’s basketball knocks off Morehead State behind big first half 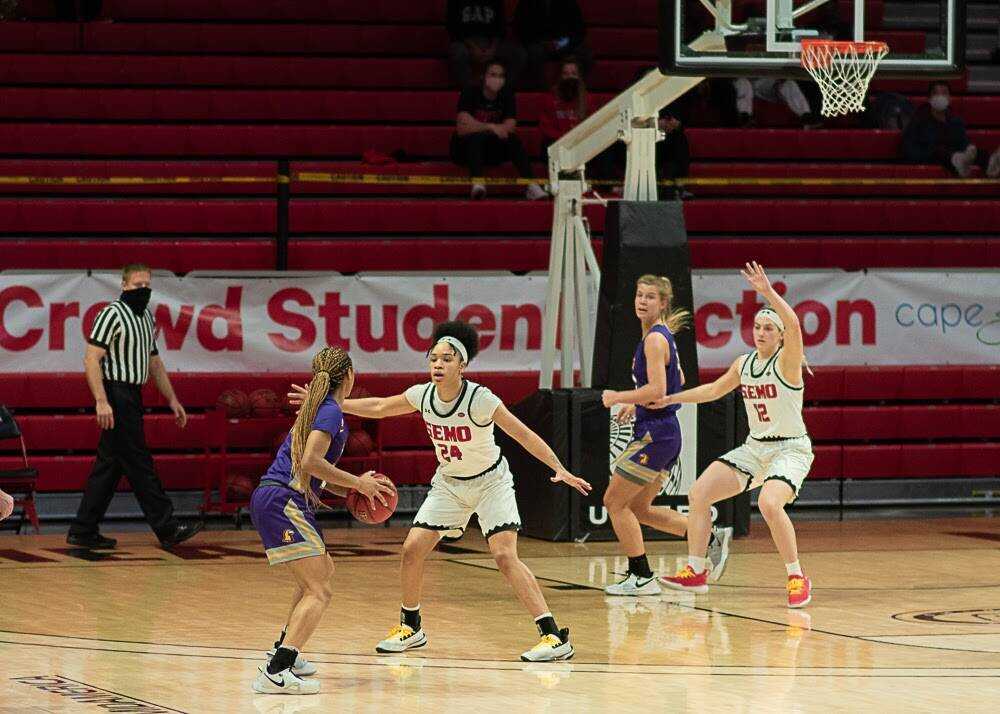 Senior guard Tesia Thompson guards the ball during Southeast's 59-55 win over Tennessee Tech on Feb. 4 at the Show Me Center in Cape Girardeau.
Photo by Anna Estes

The SEMO women’s basketball team defeated Morehead State on Saturday, Feb. 20 by a score of 61-52.

Junior guard Taelour Pruitt’s 17 points pushed the Redhawks past the Eagles in their final home game of the season. The matchup would be Latrese Saine and Tesia Thompson’s final games in the Show Me Center as the two seniors will be graduating in May.

The Redhawks started out of the gate fast, taking a 20-4 lead by the end of the first quarter. Southeast hung onto the lead throughout, never letting Morehead get within seven points. After starting off slow in games against Murray State and Eastern Kentucky, Southeast coach Rekha Patterson said it was a nice response to get out to an early lead.

“We talked about how poor we were defensively Thursday night and how we had to be different,” Patterson said, “I really like how well we responded to that poor defensive effort.”

Southeast suffered a blow in the first quarter as senior guard Tesia Thompson was injured and didn’t return to action. The Redhawks went into the locker room at halftime leading the Eagles 35-20.

Southeast turned defense into offense, as the Redhawks were able to force 21 turnovers and score 26 points off of them, while only giving up 12 turnovers of their own.

In the second half, Morehead State started to pull closer to the lead partly due to their shooting from behind the arc. The Eagles shot 4-8 from three-point land in the third quarter, outscoring Southeast 18-11.

“We understand that that’s what those kids do, and we didn’t want to let them get comfortable,” Patterson said. “But I thought when they threw a punch that we did a good job responding.’’

Southeast’s defense was anchored with the help of Saine’s performance. Saine had five blocks and three steals on the day, along with 12 rebounds and six points.

“It means a lot to me that I can come out and perform the way I did today,” Saine said, “It was just remembering this is my last game playing on this court, so I had to give my all.”

The Redhawks finish their season on a two-game road trip to Illinois to take on Eastern Illinois and SIU Edwardsville on Thursday, Feb. 25 and Saturday, Feb. 27. The win moved Southeast into third place in the Ohio Valley Conference with the tournament starting up on March 3 at the Ford Center in Evansville, Indiana.