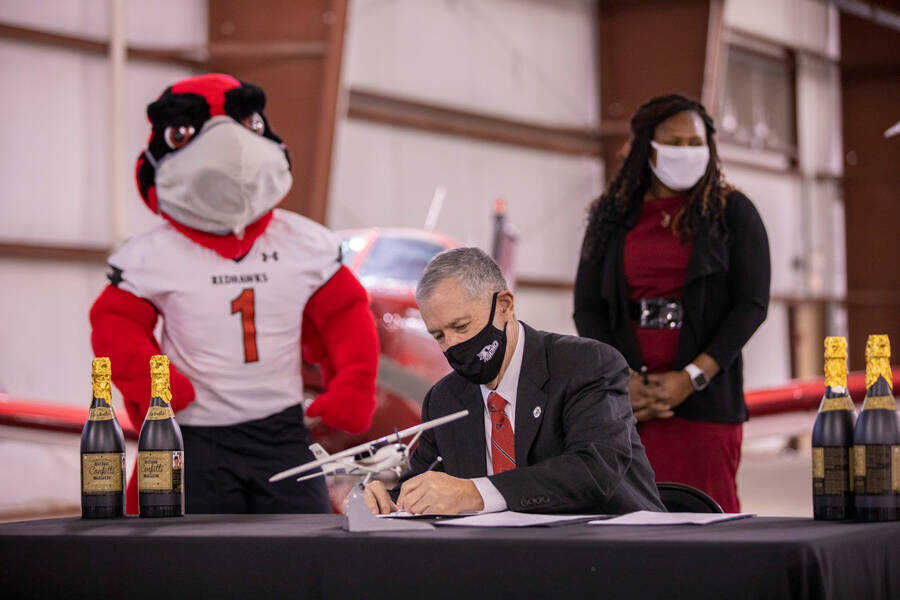 In the latest addition to the Southeast curriculum, the new professional pilot program is set to begin this fall.

Before coming to Southeast, Jackson was state supervisor of instruction with the Missouri Department of Elementary and Secondary Education and former superintendent of Dexter Schools. He received his pilot license in 2017.

The original idea for the professional pilot program began with Jackson noticing a shortage of military pilots in 2018. In October of that year, Jackson met with President Carlos Vargas to discuss a plan for the new pilot program.

Jackson began by looking at what pilot programs like the ones at Ozark Technical College (OTC) and Missouri State University offered. He said he realized after some research that Cape Girardeau offered everything the programs he researched offered, including an airport only 15 minutes away from campus and the ability to offer a four-year program, which are both crucial to having a successful pilot program.

Before speaking to Vargas, Jackson mainly based his plan off of OTC’s two-year program.

“When I talked to Dr. Vargas about the fact that OTC was a two-year program and those students were transferring … his statement was, ‘That won’t be necessary here; SEMO can do it all,’” Jackson said. “A student will be able to enroll here, get flight training, get a four-year degree, and they won’t have to worry about transferring credits in.”

The program operation includes partnerships with the Cape Girardeau Regional Airport and U.S. Aviation Group (USAG): The airport will provide the program with classrooms and a place to store and fly planes, while USAG will provide instructors, flight training and planes for students to fly.

Flight training for new students will begin in their first semester, and Jackson said, “It isn’t unusual for students to be handed the yoke in their first time in the plane.”

According to Boeing’s Pilot and Technician Outlook for 2020–2039, there will be a demand for 763,000 pilots in the next 20 years. That number dropped from approximately 800,000 after researchers assessed the damages to the industry from the pandemic. The report states the long-term effect on the industry is still robust.

This demand for pilots is a key reason the university is establishing the program now, as the future looks bright for the industry.

Most major airlines require a bachelor's degree in any subject to be hired as a pilot, but outside of airlines, the four-year degree can be the difference between two candidates.

In preparation for the program’s commencement in the fall, Jackson has been meeting with high school students in Zoom meetings in an effort to recruit them.

“That’s the whole driving force for me to work on this,” Jackson said. “I want to establish a career pathway for high school students to go to SEMO, get their degree and become a professional pilot.”

Southeast’s Board of Regents is expecting 10 students in the first year of the program and 30 in the next. For more information on the new professional pilot program, visit https://semo.edu/study/bs-pilot.html.