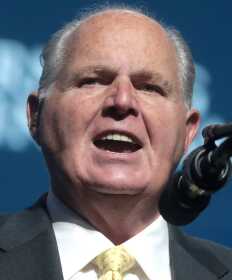 Limbaugh began his radio career as a disc jockey at KGMO in Cape Girardeau. He would spend three semesters at Southeast Missouri State University.

He continued pursuing radio, building a career commenting on politics and society that developed a loyal following on the political right. He also sparked controversy with his comments.

Professor Emeritus of Mass Communications Bruce Mims said Limbaugh’s impact on the industry was substantial. He said that after the advent of FM radio’s popularity for music broadcast, AM radio was left with a void that Limbaugh filled.

“AM radio had fallen into a steep and severe decline,” Mims said. “And all of a sudden, they have a program three hours each day that is wildly popular with people who want to listen to talk radio.”

Conservative radio commentator Faune Riggin of Cape Girardeau’s KZIM said Limbaugh opened the door for her and other broadcasters, and that speaking his mind inspired a loyal following.

Riggin said with Limbaugh’s death that Cape Girardeau had “lost a hero.”

“He spoke for the tens of millions of people who feel like they can’t speak anymore without being canceled,” Riggin said. “And Rush just didn’t care.”

In Cape Girardeau, because of the impact of his family on the city, his surname is present across the city, from the Rush Hudson Limbaugh Sr. United States Courthouse to the Limbaugh Firm.

A self-guided “hometown tour” exists to direct devotees throughout the area to see places that were significant in his life.

“For good, bad or otherwise, you have to say that he put Cape Girardeau on the map,” Mims said.

Despite his impact on the industry as what some regard as the “savior of AM radio,” Limbaugh often used his platform to personally attack opponents, making a record for himself of racist, sexist and other types of offensive comments.

Social Media Director for College Democrats at Southeast Ethan Schumer said it was “impossible to not remember the worst of Limbaugh's career while acknowledging his death,” such as his attacks on gay men during the AIDS crisis and his comparison of Chelsea Clinton to a dog.

"We should remember that all humans deserve respect and dignity, and unfortunately, Rush Limbaugh never did that in his life,” Schumer said. “He can take credit for creating so much of the division in the country and spreading hate. Rush Limbaugh leaves this world only doing harm to it."

During his career, Limbaugh also received criticism for mocking Michael J. Fox and for voicing skepticism that the actor’s Parkinson’s disease was as severe as it seemed when Fox appeared in an advertisement advocating for stem cell research.

In Feb. 2020, before it was declared a pandemic by the World Health Organization, the Guardian reported that Limbaugh said the novel coronavirus was actually “the common cold,” and that the media was weaponizing it against President Donald Trump, garnering criticism for downplaying the severity of the virus.

In Feb. 2020, he was awarded the Presidential Medal of Freedom by Trump.