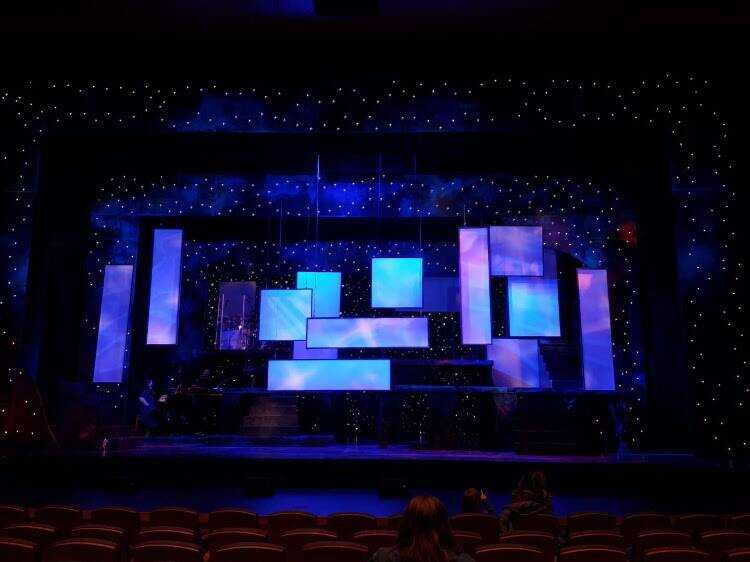 The set for “Unlimited: The Music and Lyrics of Stephen Schwartz,” before the world premiere of the show. Prior to the event, multiple students were involved in making the set.
Photo by Josh Seabaugh

River Campus students have inspirations that led them to choose their path, which includes certain music. Musicals like “Wicked” or “Godspell”, or songs like “Colors of the wind”. Those works were made by Stephen Schwartz. On Feb. 18, the world premiere of “Unlimited: The Music and Lyrics of Stephen Schwartz” occurred at the River Campus.

The musical was performed as a revue, a form of theater that involves a series of songs. Similar to “Les Misérables,” revues have little to no spoken words, and instead, have the story told through singing and dancing.

“Unlimited” was made for universities with help from professionals, including Stephen Schwartz himself. Kitt Lavoie, assistant professor of theater: acting and directing, directed Southeast's performance.

With a snowstorm affecting Southeast Missouri, Lavoie was worried the winter weather would prevent the show from premiering on the planned night.

”We’re very grateful we didn’t have to postpone [“Unlimited”]. As it was predicted to be snowing on the 17, we were a little worried that the show would have to be canceled, but thankfully, it wasn’t,” Lavoie said.

The main cast included five students who played themselves. The cast included background dancers and singers and a musical group who performed together. Southeast musical theater senior Josslyn Shaw was one of the five actors in the show.

“While it was a little difficult doing rehearsals with social distancing, everyone worked really hard — the main cast, the dancers, production,” Shaw said. “In the end, we all got along really well, and I think that we put on a great show.”

”I think it was amazing,” Cook said. “The set design was phenomenal; the actor’s voices were beautiful. I’m really happy I came.”

The next series coming to River Campus will be “I Love You, You’re Perfect, Now Change,” which will premiere March 3. Students will be able to purchase tickets at the box office for $3 by showing their student ID.