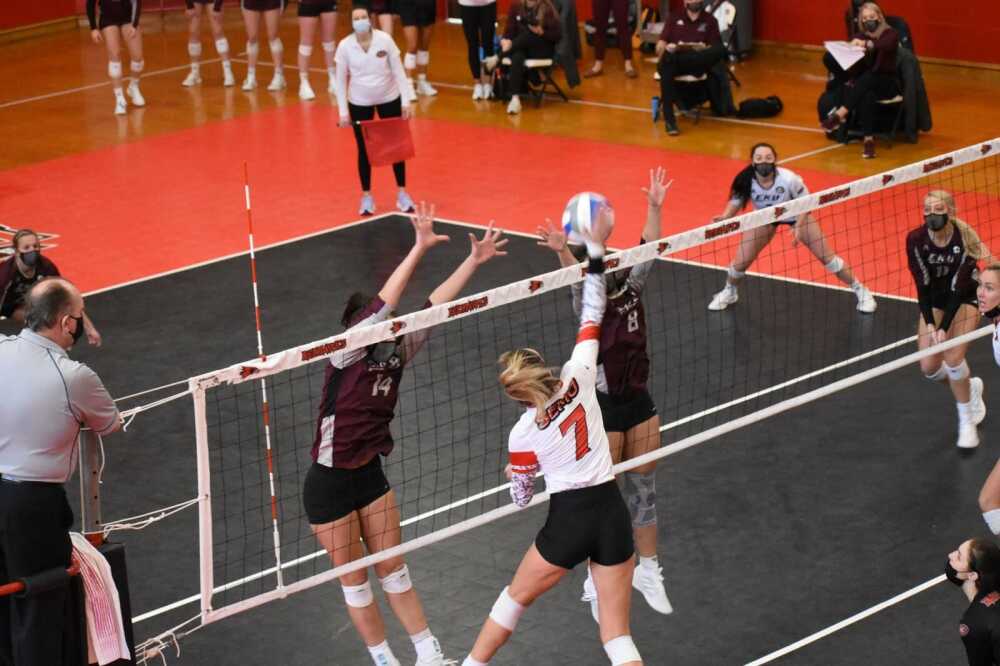 Senior outside hitter Laney Malloy goes for a spike during a pair of four set wins for Southeast over EKU on Feb. 14 at Houck Field House in Cape Girardeau.
Photo by Caleb Burris

A good night of attacking helped Redhawks’ volleyball take down SIUE 3-1 Feb. 28. The Redhawks had a total of 60 kills, a season high, which nine of the 10 players contributed to. They had 14 kills in the first set, 16 in the second, 17 in the third and 13 in the fourth.

Redhawks head coach Julie Yankus said a good start is something her team practiced for.

“We worked on a quick start all week. We put them in the gym and instantly had them compete,” Yankus said. “Running and things like that were on the line because we had to show up ready to compete. We knew we couldn’t just give away a set to a good team like SIUE.”

Southeast was led by senior outside hitter Laney Malloy. Malloy had 18 kills and four assists. Right behind her was sophomore outside hitter Zoey Beasley, with 17 kills on a .389 hitting percentage.

Even though Malloy had an above-average game stat-wise, she did not feel like she was the only one contributing.

“I feel like it was a good team effort. It’s never only one person. When we’re all playing well, that’s when we are playing our best,” Malloy said. “If everyone does their job, it’s great for every player.”

Malloy had high praise for junior setter Claire Ochs. Malloy felt like Ochs was distributing the ball pretty well, as Ochs had a season high of 46 assists in the win.

“This was a big confidence builder for us,” Yankus said. We lost to SIUE twice last year, so they were definitely a team we wanted to compete against and turn things around.”

Southeast plays SIUE again March 1, and Malloy said another win over them is when she will be satisfied.

“We still need to come off strong tomorrow. We don’t know what’s going to happen. Tomorrow is just as important a game,” Malloy said. “I feel like it’s not really over yet. We still need to win tomorrow, and then we can celebrate.”

The victory puts the Redhawks at 5-2 overall, 5-2 in the Ohio Valley Conference. Southeast is currently tied for second in the OVC with Austin Peay and UT Martin.