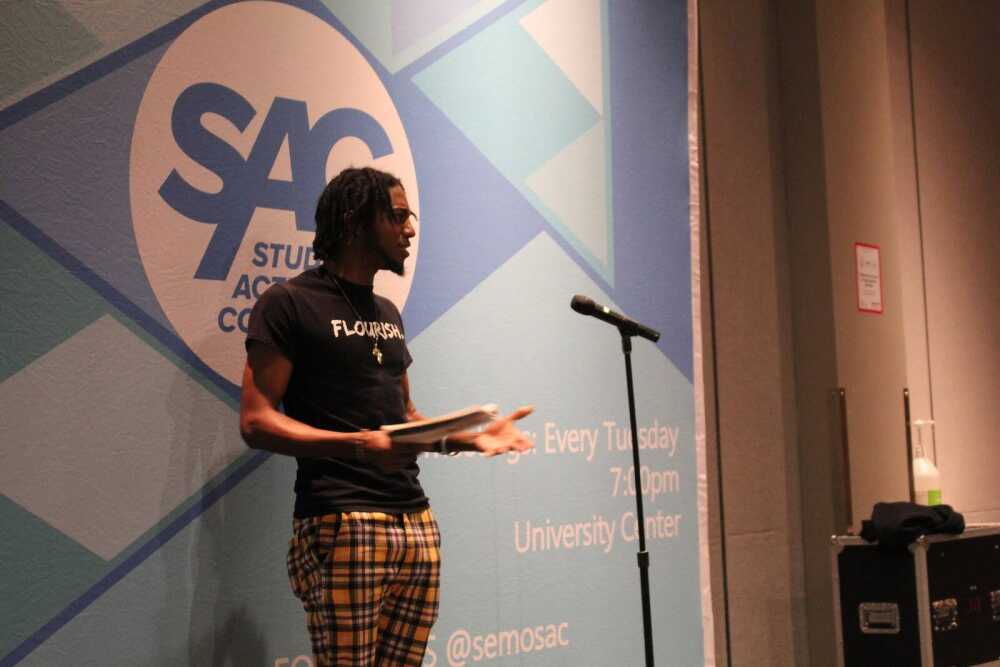 Jahman Hill reads his poem “Ghost Pepper” from his poetry book "Made From My Mother’s Ceilings.”
Photo by Nicolette Baker

Poet Jahman Hill read poetry to students at Southeast from his book “Made From My Mother’s Ceilings” at the University Center at 7 p.m. Feb 25.

Jahman Hill is a poet, playwright, film producer and professor from Kansas City, Mo. He began writing poetry after considering the suggestion of a close friend.

“In 2014, I attended the University of Alabama ... and [Eric Marable] told me I should write poetry. Before then, I thought I was going to be a rapper/basketball player,” Hill said.

“The first few poems I wrote, I was already talking about the Greek system on our campus and how white Greek systems are really not adding Black people, and I wanted to address that, and that is where I first started to write about race with my first few poems,” Hill said.

Jahman said his poems started to get recognized and gained attention through social media.

“It was really a lot of me putting myself out there and try to place myself in spaces where I knew large poetry audience existed, so my most-viewed poem on YouTube was ‘White Heaven’ that was put on by Button Poetry, and I performed at that poetry competition only because I knew Button was there and people would see it,” Hill said.

Tyrell Gailwater said attending the event felt inspiring, and he collected a lot of information he could use in his daily life.

“I took away a great message from Mr. Hill's poems because they all had deeper meanings and different things you can interpret,” Gailwater said. “The biggest lesson that stuck out to me the most was be you, and be proud of yourself, and appreciate yourself because that can really start your day off positively.”

“We thought [Hill] would be really good and fit in great for our campus, and then we also chose him because we wanted to create a widespread event for Black History Month,” said Anthony Pulliam, Student Activities Council vice president of marketing.

For more information on upcoming SAC events, visit their website at https://semo.edu/sac/.