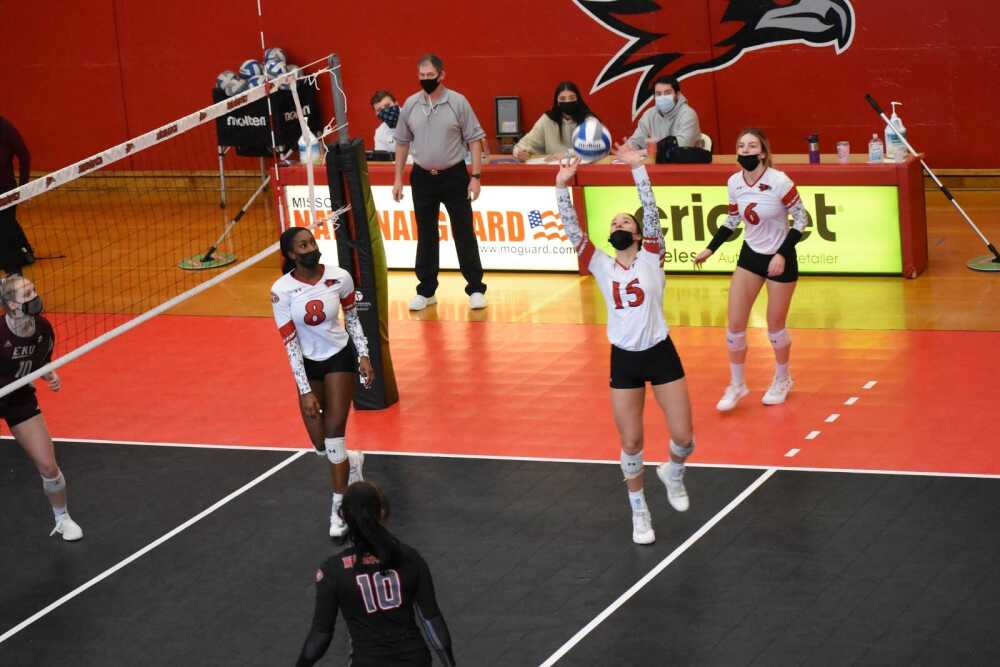 Junior setter Claire Ochs sets the ball during a pair of four set wins for Southeast over EKU on Feb. 14 at Houck Field House in Cape Girardeau.
Photo by Caleb Burris

Redhawks coach Julie Yankus said that it was nice to be in command.

“It's always fun to play a game like that where you don't feel like you're trying to claw from behind,” Yankus said.

The Redhawks went down 3-0 to start the first set when they got a spark from senior outside hitter Laney Malloy.

Malloy led a 4-0 run for the Redhawks that helped shift the momentum in the set. Yankus said that the confidence Malloy has gained in her time here has helped her become such a strong leader for the Redhawks.

“She's a captain for us. She leads by example and she's a good vocal leader too,” Yankus said. “I think she's really gained confidence during her time here and now as a senior she has that confidence in her ability and she knows that.”

Yankus praised her team for executing their game plan perfectly. They kept SIUE from playing their normal game of well balanced offense. Yankus said the other part of their game plan was to score points while the Cougars setter was in the front row.

Yankus said that the team knew they needed to pull ahead and they did so.

“We really focused on minimizing our errors,” Yankus said. “Knowing that if we needed to we set the ball for the setter, and we started progressing but we really stuck with the game plan.”

A major point of Southeast’s game plan was to minimize errors. Yankus said this was the first time that they have met their goal on minimizing errors and the amount of points they are giving away.

Yankus said the Redhawks gained momentum from this win and talked about how important this is heading into the middle of the season.

The win moved Southeast to 6-2 overall and 6-2 in the Ohio Valley Conference.

The Redhawks are back in action on March 7 when they travel to Martin, Tennessee to take on the University of Tennessee at Martin Skyhawks.