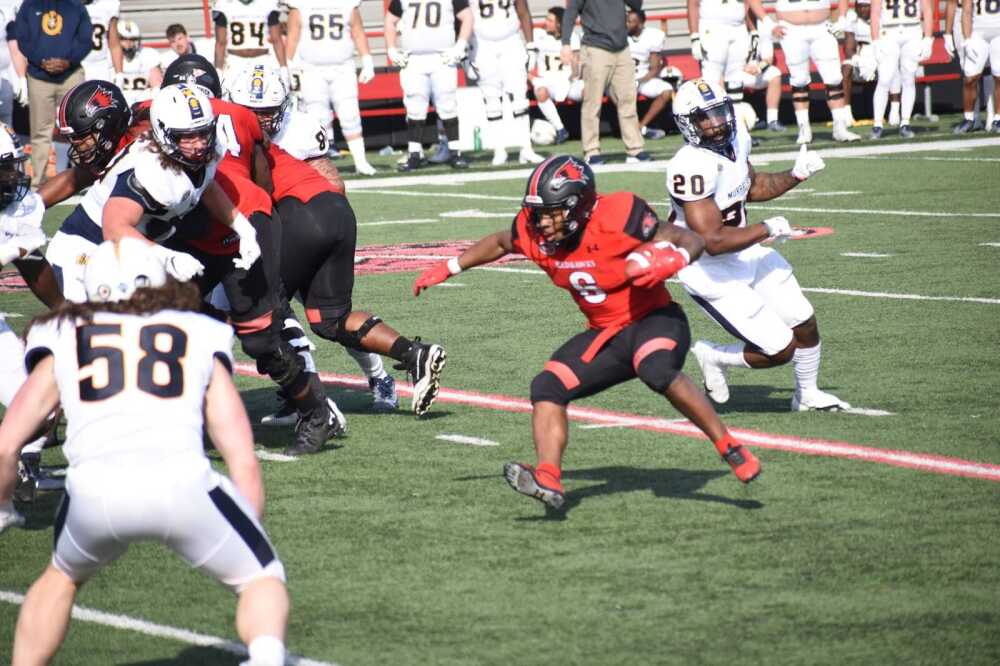 Turnovers and the inability to find the end zone in the first half burned the Redhawks in their 24-21 loss to the Murray State Racers on March 7 at Houck Field in Cape Girardeau.

Southeast scored on their opening drive when junior running back Zion Custis scored from five yards out to give the Redhawks a 7-0 lead just over three minutes into the first quarter.

The Racers responded in under two minutes when senior running back Rodney Castille hauled in a 26-yard reception from redshirt junior quarterback Preston Rice to even the score at seven.

The Redhawks would not score again until the fourth quarter. Southeast coach Tom Matukewicz said the defense of Murray State had the offense on lockdown.

“We didn’t adjust quick enough on offense to their scheme,” Matukewicz said. “Our players and even our coaches [didn’t] respond well to the adversity.”

“[We] shot ourselves in the foot when we had chances to score points,” Hess said.

The Racers defense forced redshirt senior quarterback Andrew Bunch to throw two interceptions, including a pick six that gave the Racers a 14-7 lead in the first quarter.

Bunch completed 15-of-27 passes for 112 yards and threw three interceptions.

Matukewicz gave credit to the Racers defensive line for the pressure they put on the offensive line and Bunch.

“Murray’s defensive line and their front did a way better job in the run game and the passing game,” Matukewicz said. “We definitely seemed to lose the point of attack there.”

After one quarter of play the Racers led 17-7, and that score would stick until Custis ran for his second touchdown of the game from one yard out with 12:42 left in regulation.

Less than a minute later graduate student defensive back Shabari Davis intercepted a pass from Racers’ quarterback Preston Rice for a touchdown to give Southeast a 21-17 lead.

Murray State would answer on the ensuing drive when Rice ran the ball into the end zone from three yards out to give the Racers a 24-21 lead they wouldn’t relinquish.

Southeast came up with a fourth down stop that would have given them the ball with just over two minutes left in regulation, but a personal foul for a late hit was called on graduate student Bryant Pirtle, giving the Racers an automatic first down.

Murray State maintained possession until the Redhawks forced a turnover on downs with 22 seconds left and the ball on their own 27-yard line.

Matukewicz said the Redhawks can’t dwell on the loss for too long.

“You hate that you lose one, you lose one at home, and the way you lose it but at the end of the day [we] can’t let Murray beat us twice,” Matukewicz said.

The loss moved the Redhawks to 1-2 on the season and 1-1 in Ohio Valley Conference play.

They are back in action on March 14 when they host the Austin Peay Governors.