The Life of a Chef 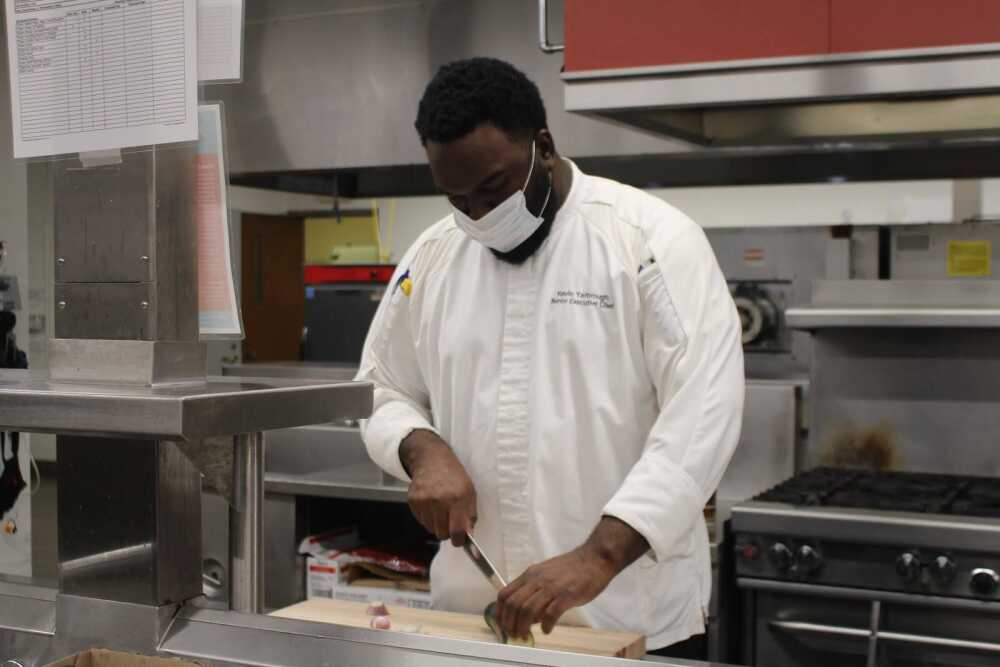 Senior Executive Chef Kevin Yarbrough shows his culinary skills as he slices vegetables to serve to students at Southeast.
Photo by Beau Nations

Few people ever step into the kitchen of a restaurant and see the ins and outs of what goes into the food preparation process. Even fewer people take the opportunity to sit down and get to know the people who attentively prepare each meal for guests. If they did, they might hear a story of hardship, adversity, dreams and success. One of those stories can be heard here at Southeast.

Senior Executive Chef Kevin Yarbrough began his culinary career at Southeast four years ago, but the story of his life began in Memphis. Yarbrough said he looks back at growing up in Memphis fondly.

“It wasn’t as bustling of a city as it is now, so it was kind of laid back. You got to play around outside all night,” Yarbrough said. “The neighborhood that I grew up in, everybody was family.”

“My great-grandma cooked everything from scratch. She would peel the peaches for peach cobbler, and I would eat the peach peels while she made the cobbler,” Yarbrough said. “Growing up around the kitchen, I picked up on a lot of secrets, a lot of tips.”

At the age of 13, Yarbrough received his first job in the food industry at Hardee’s. It was there he learned how to manage a kitchen. The experience taught him “to always be the best he could be” in the kitchen and in life.

As Yarbrough grew, so did his competitive streak. Upon graduating from high school, he received a football scholarship to Ole Miss. Unfortunately, due to a recurring injury, Yarbrough was unable to play.

With football out of the question, Yarbrough fell back on his culinary roots. He described the decision as a “no-brainer.” Yarbrough attended L’Ecole Culinaire in Memphis to begin his career. Staying close to home for school was important to him because of his two-year-old daughter.

After finishing culinary school and working as a chef in multiple establishments, Yarbrough and his wife considered moving somewhere else. He applied at Southeast and received the job after completing the chef test. During his time as senior executive chef at Southeast, Yarbrough has grown to love being able to talk to the students the most.

“I know [students] are away from home, and it’s a lot of people's first time being away, so just to give them the environment that we’re a family is important,” Yarbrough said. “Everyone’s upbringing is different. People have different pasts. So, just to get to know them, so I know how to approach them and just be one with them.”

Throughout his life, Yarbrough has held one specific value above all the others: integrity. It has guided him through life and helped him to continue to thrive in his career as a chef.

“You gotta live life like no one is watching you. I do right by people. I put good into the world. I just uphold myself to a higher standard,“ Yarbrough said. “That kind of branches off into being dependable, being trustworthy.”

Yarbrough says he is not quite finished yet and has big plans for himself in the future.

“I want to be able to share the knowledge that I’ve gained, not just keep it to myself. I wanna be able to teach people how to run a business,” Yarbrough said. “I want to create a few nonprofits where I can reach out to at-risk youth to teach them that there’s more ways to become successful than just drugs and sports. The possibilities are out there.”

For the students interested in pursuing a career in the culinary field, Chef Yarbrough has some helpful advice.

“Be ready. It’s not easy. It’s not like it is on TV. There’s a lot of hard work, long hours, long days. It’s definitely a job you have to be passionate about,” Yarbrough said. “There are people I went to school with, out of a class of 20, maybe five graduated, two of them are still in the field.”

Yarbrough and his team currently cook at the University Center at Southeast for Chartwells.