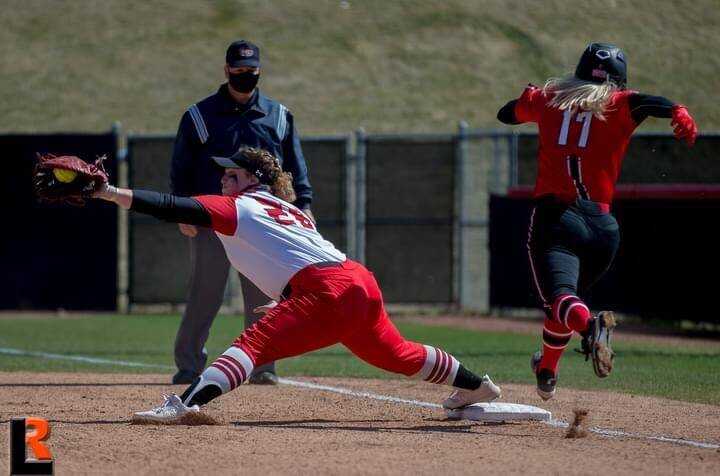 The Southeast softball team has seen many players come and go from the program. Through it all, single-season home run (17) and RBIs (60) record holder and first baseman, Ashley Ellis, has made a huge impact on the environment surrounding the team.

Due to the COVID-19 pandemic, Ellis’ mentality going into each game has one clear goal in mind.

“This year, I kind of go in as each game could be my last,” Ellis said. “I was watching the Michael Jordan documentaries, and one of the things that I remember he said was he played every game like somebody in the stands hadn’t seen him play before, and that’s always been in my mindset now.”

Ellis has grown to know what Coach Mark Redburn wants from the team, and she strives to help the other teammates reach the expectations the team should meet.

“Playing for Coach Redburn for the four and a half to five years has given me more of his knowledge of what he wants from each player, and what he sees and how he wants to play the game,” Ellis said. “Which I think I can contribute to teammates who might not understand his explanation, but I might be able to give a different one to help.”

Redburn sees his first baseman as one who stands out amongst other softball players.

Redburn says Ellis, along with the rest of the players on the team, bounce back after a tough game or rough plate appearances. He said the team realizes tomorrow is a new day, and they are going to come out and compete.

Redburn says Ellis’ game has improved more and more as each season progresses.

“She’s always been steady there at first base and very good defensively,” Redburn said. “But I think the biggest thing is just learning how to hit at this level, but also being able to hit for power.”

Redburn said Ellis’ mentality to continue to improve led to her success at the plate and on the field.

Ellis said what motivates her most when it comes to softball is knowing she can still help her teammates during failure and success. After dealing with mental blockages earlier in her career, she uses what she learned during those times to help her teammates deal with the same issues.

“It was hard for me my sophomore year,” Ellis says. “I realized how negatively that affected my performance, and I would like to help all the younger kids and anyone in sports who goes through that.”

Ellis and the Redhawks travel to Cookeville, Tenn., March 12 to kick off a three-game series against the Tennessee Tech Golden Eagles.

**The subject of this story is a staff member of Southeast Arrow.