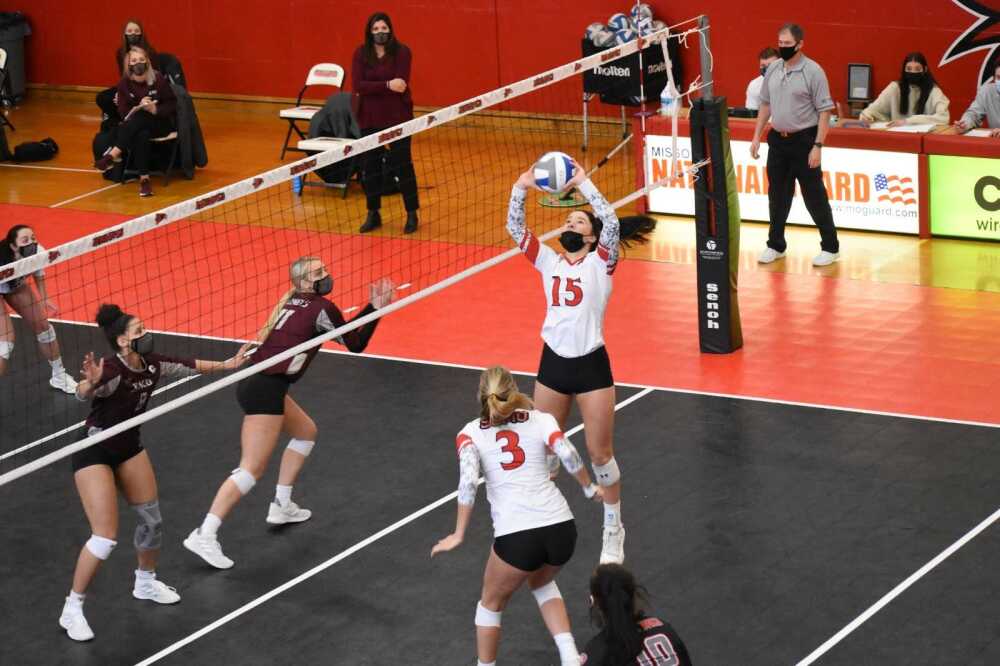 Junior setter Claire Ochs sets the ball for senior middle blocker Maggie Adams during a pair of four-set wins for Southeast over EKU on Feb. 14 at Houck Field House in Cape Girardeau.
Photo by Caleb Burris

Southeast volleyball defeated the Austin Peay Governors in straight sets Sunday, March 14 at Houck Field House. The Redhawks offense was the main reason they were able to defeat the Governors. SEMO took the first set by a score of 25-18, the second set 25-20 and the third set 26-24.

Senior outside hitter Laney Malloy had 16 kills and sophomore outside hitter Zoey Beasley added ten of her own. Malloy said that she was able to perform so well because her teammates were executing well.

“When everyone is doing their job then there are more holes and openings for me because they’re focusing on other hitters,” Malloy said. “It makes my job easier and then I’m able to get kills.”

The victory makes nine in a row for the Redhawks and puts them in third place in the Ohio Valley Conference behind the Morehead State Eagles and Jacksonville State Gamecocks. SEMO coach Julie Yankus said they knew the match would be challenging, but they followed their game plan.

“We’re down our starting libero [a back-row defensive player] so we faced some adversity this week,” Yankus said. “I’m very happy with coming away with a win against a very good Austin Peay team.”

The defense of Southeast helped them soar to the match win, with 15 digs from senior defensive specialist Ally Dion and 14 from Ochs, along with a total of ten blocks, four of which were by sophomore middle blocker Talia Gouard.

The Redhawks are back in action March 15 at 3 p.m. at Houck Field House in match two of the series against Austin Peay.