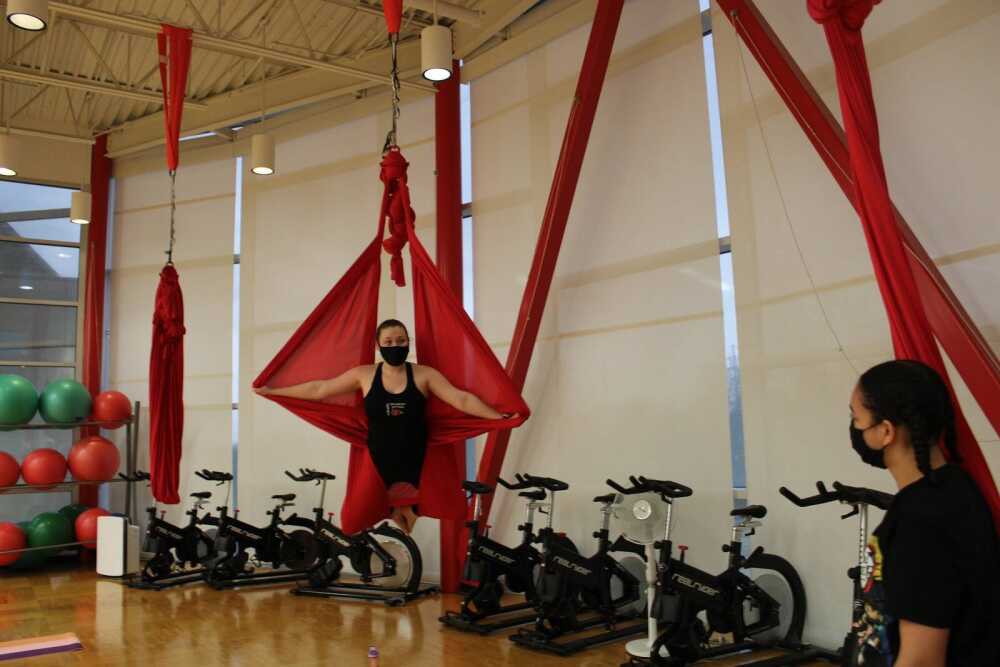 Participants arrive, slightly late, still sleepy. They unroll their yoga mats, positioning them under red fabric hammocks hanging from the ceiling and place their water bottles carefully nearby.

“It’s an exercise that doesn’t feel like an exercise,” she said. “It’s empowering, and everyone that I teach is super enthusiastic and super excited whenever they hit that hard trick.”

Seated on her mat, she guides the class to begin by reaching up and grasping the loop of the aerial silk. They gently swing the hammock and their upper bodies clockwise, then counter-clockwise.

The students each said they have different reasons for attending the early morning yoga session.

“I really like it because I have ADHD, so it’s really hard to focus and relax,” freshman Anna Schallom said. “When I’m doing this, I’m able to focus on the poses and all that stuff, so when I get into it, I’m in the zone.”

As the class progresses, they practice warrior poses by looping their feet through the silk, extending the rest of their body forward. While the early morning class isn’t as popular as the afternoon, Naeger said there’s always a few dedicated members in attendance.

The three student participants move through sun salutations, a modified version of the classic yoga routine. As the class flows from pose to pose, the yoga session often brings laughter.

Naeger, who is a Southeast student herself, said she enjoyed aerial yoga so much that she installed a blue hammock at her family’s home. She purchased a $150 silk off Amazon and installed it at their outdoor pavilion overlooking a lake.

“I just felt — why not? It’s something that I like. When I graduate here, I want something at my house to continue this with,” Naeger said.

After the last sun salutation pose, the class moves to practice skills. Each student tries a different pose they’ve been practicing, with Naeger’s encouragement. One student twists the silk around her hips for balance then flips upside-down, bending her leg around the front of the silk to stay in place.

Naeger said this is often students’ favorite part of the class. During this 10-minute session, she shows off poses such as “butterfly” and an unnamed pose she created herself.

Nearing the end of the class, she instructs her students to move more slowly. The participants climb into their hammocks in a cocoon-like pose, signalling the start of the meditation portion of the class.

Naeger flicks off the lights; it’s a little past 7 a.m., but the cloudy weather provides no light from the group fitness room’s wall of windows. Accompanied by soft pop music, the instructor asks the students to consider the answers to several questions, similar to these:

What are your goals? What are you proud of this week? What is the current status of your mental health?

One factor motivating sophomore Calantha Remy to attend the early morning class is the impact on her mental well-being.

“It balances me and gives me something to destress and release all the pent-up energy that I have,” she said.

Naeger said beginning her morning with a yoga workout helps create a positive start to her day. On days she isn’t teaching the morning class, she said she feels something is missing.

After the yoga session ends, two of the participants — junior Megan Oster and Schallom — head to breakfast at Kaldi’s on campus before heading to classes.

“It’s nice that it’s in the morning, because it’s like you’re done and it's over with, and you feel rejuvenated,” Oster said.

Aerial yoga classes are held from 6:30 a.m. to 7:15 a.m. on Tuesdays and Thursdays, and 7:30 p.m. to 8:20 p.m. on Thursdays. For more information on group classes, download the SEMO Rec Services app. Participants must sign up on the imleagues app.