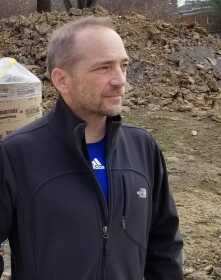 Missouri poet John Gallaher performed a virtual reading of a collection of his poems as a part of the Dorothy and Wedel Nilsen Visiting Writer Series Monday, March 15. The event is sponsored by the Southeast Missouri State University Press.

Gallaher is the author of five poetry books, including his most recent release, “Brand New Spacesuit.” His work has appeared in several national publications.

“I think [art] is a necessary part of daily life,” Gallaher said. “We all participate in all the things we can, as well as we can, but I think we should not forget that art is part of that.”

Gallaher’s poems feature a variety of topics and situations from the poet’s life, from a recollection of a drive across Missouri to the death of his mother.

“It’s a great use of one’s time to create art,” Gallaher said. “Art is the place where we practice living.”

Jenny Cropp, assistant professor of English and organizer of the event, said the reading was a way for students to connect with professional writers.

“I thought it would be wonderful if we could have John come and speak to the students because he is a Missouri poet,” Cropp said. “I think it’s very important for our students to see people from our state who are doing these things.”

The event was held virtually and on Facebook Live for the first time ever this semester, Cropp said, and she missed the sense of community when filling an auditorium for the event.

“Depending on the night of the week, sometimes 30 to 50 people will show up. And we make it open to the public so the community can come, as well,” Cropp said.

Attendee and creative writing major Maggie Brown said she feels more connected to the works after going to readings.

“With poetry, because so often it’s really personal, you get to feel connected to a person that you might not know at all because they’ve experienced something similar,” Brown said. “There’s so many different ways you can interpret every word. Feeling like I have that context helps a lot.”

To learn more about Gallaher, visit poetryfoundation.org/poets/john-gallaher. “Brand New Spacesuit” is available for purchase at Barnes & Noble bookstores and online at boaeditions.org/products/brand-new-spacesuit.