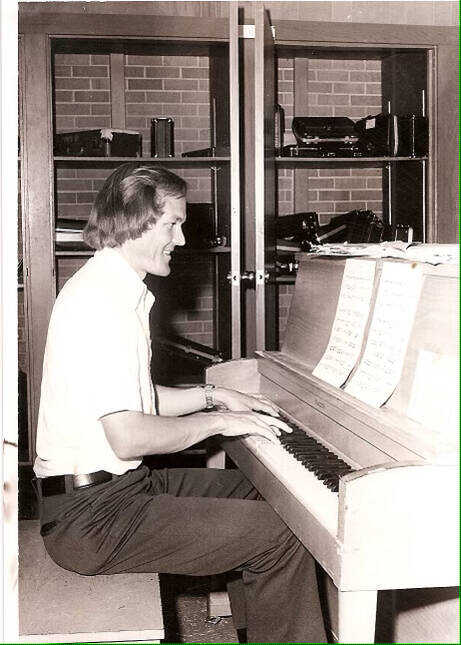 As band director at Kennett High School, Nail played the piano for students after rehearsal in the late 1970s. He said that he’d take requests from students and they’d often try to challenge him by requesting songs they thought he couldn’t play.
Photo submitted by Dennis Nail

Dennis Nail remembers the first moment he fell in love with music.

It was to the tune of “I Want to Hold Your Hand” — the first song he’d ever heard by the Beatles. After basketball games his freshman year of high school in the early- to mid-1960s, Nail and a friend would tune into a radio station out of Chicago. That night, they were playing the first No. 1 hit by the Beatles.

In the same way the British Invasion soon took over American radios, Nail said the music “lit a fire” in him.

“To this day, it’s not one of my favorite songs at all, but it’s the one that really triggered it,” Nail said.

The Southeast adjunct instructor and longtime band director has since seen it all. From directing decades of high school band classes to playing at the Super Bowl, music has guided his life.

In fact, his pursuit of music education was a “freak story” — a simple twist of fate, combined with a bit of impatience on his part.

“I was never one who enjoyed waiting in lines. When I went up for summer orientation, we went into Memorial Hall there … and that’s where you sign up for your first classes,” Nail said. “And the one at the business table, that was a long, long line.”

When first applying to Southeast, Nail said he intended to major in business or accounting. At orientation, those lines were too long, he said; so he visited the music education booth, instead, as any advisor could sign him up for basic classes. When he got to chatting with the music advisor, he said he realized music could be the right fit.

“I was surprised that I actually had a higher degree of music aptitude than what I give myself credit for, and did really well in the theory classes and kept falling more and more in love with the music classes,” Nail said.

The Kennett, Mo., native enrolled in Southeast’s band as a trombone major after encouragement from a high school instructor. From there, he spent the next four years exploring brass instruments, piano and guitar.

During his senior year, Nail was elected president of the band. His responsibilities included organizing the annual band banquet, and, as luck would have it, taking the Golden Eagles Marching Band to the 1971 Super Bowl in Miami. He describes the week-long trip as an unforgettable experience.

“The Super Bowl committee flew us down there — they sent two planes to Cape,” Nail said. “Of course, it was warm down there, to a certain degree, so we took a whole day off and everybody went down to the ocean.”

That year, astronaut Linda Godwin played in the band as a freshman, Nail said.

After college, he immediately began teaching band at North Pemiscot, Mo., where he stayed for several years. Shortly after his post-graduation hiring, Nail said he was drafted to serve in Vietnam. Due to an injury sustained years prior, however, he wasn’t deemed eligible.

He was later hired at New Madrid, Mo., then Kennett, serving the school districts for a total of 31 years. Some of his students have gone on to pursue music or band directing themselves, Nail said. He holds the philosophy that you can’t ever stop learning; it’s a value he hopes to pass to his students.

When they graduate from the high school band program, Nail said he advises his students to keep their instruments after college. Music is a lifelong love; they’ll regret selling their instruments, he said.

Nail himself sold his college trombone to a beginning band student who needed an instrument. Years later, his wife “surprised him beyond belief” with a Christmas gift of a trombone that belonged to Nail’s first band instructor.

Now retired from directing, the 71-year-old keeps up with his former music students, bandmates and colleagues over Facebook — an app his daughter urged him to get. He now has more than 3,000 friends and uses the platform to interact, share memories and discuss music.

He hopes to gather some of those former bandmates for a homecoming reunion in the fall.