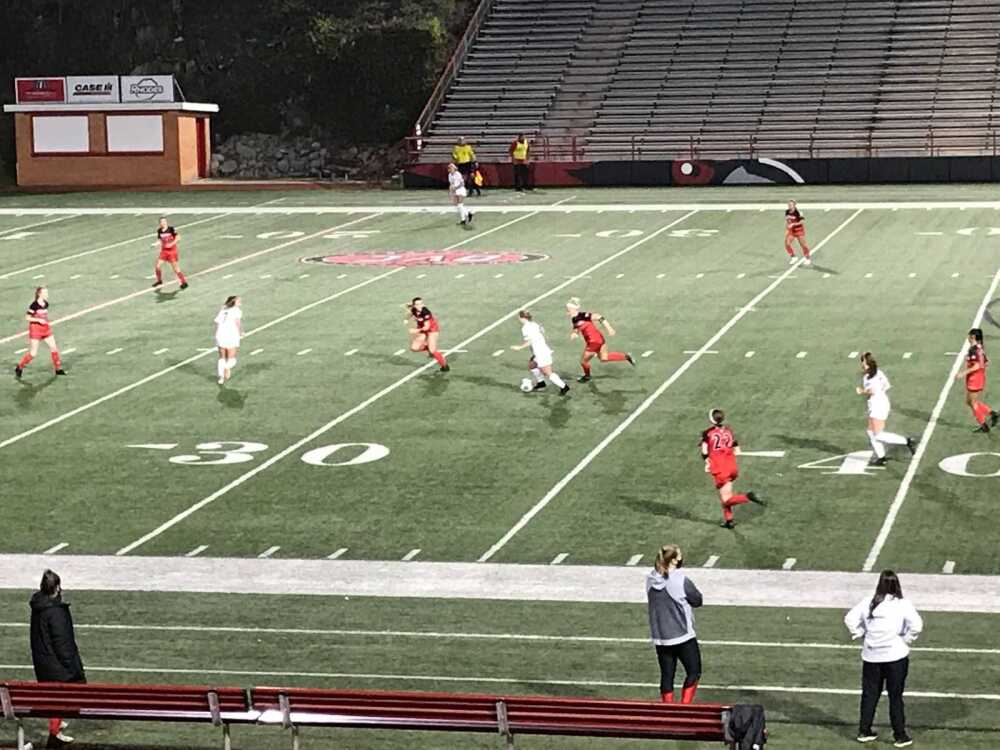 The Redhawks get back to defend during their 3-3 tie with the SIUE Cougars on March 23 at Houck Field in Cape Girardeau.
Photo by Ryan Duvall

On March 23, the Redhawks soccer team played a high-scoring game against the SIUE Cougars on Senior Night at Houck Field in Cape Girardeau. The final score was 3-3, as neither team could capitalize in overtime. Both teams were undefeated heading into the game.

The Redhawks started strong, scoring the first goal of the game 11 minutes into the first half by redshirt junior Kayla Byrd.

Offensive drives helped the Cougars score two goals late in the game to force a tie heading into the end of regulation. Neither team could score in two overtime periods, leaving the game a 3-3 tie. The Redhawks had eight shots on goal and three corner kicks against SIUE.

Redhawks junior goalkeeper Bailey Redden knew the game against SIUE would be like none other this season.

“This was going to be a huge matchup. SIUE has a great attacking offensive mindset, so I knew that I needed to help contain the offensive threat,” Redden said.

Redden had a total of nine saves against SIUE in the tie. Redden also made a critical game-saving play in double OT after she caught a head-on direct shot from close range, preventing the Cougars from winning the game.

“I personally was proud that I was able to keep my cool knowing that I would get pressured,” Redden said.

Redden also said her team knew what they needed to bring to the game against SIUE.

“It was Senior Night, so we came out with tons of energy and emotion,” Redden said. “We knew that it was going to be a battle of two extremes, so we needed to show what we could do and be confident.”

Nelson said she was impressed with her team’s play.

“Our girls came out with energy early and played with great confidence,” Nelson said. “Our goalie, Bailey Redden, made some great saves for us.”

Redhawks senior forward Emily Holten said she had the best college soccer career she could have asked for.

“SEMO soccer is like my second family, and I have made friendships that will last a lifetime,” Holten said. “It was so fun to be around girls who love the game just as much as I do.”

Holten said she had mixed emotions heading into the game against SIUE, knowing it was her senior night.

“It was bittersweet, especially playing against girls I grew up with that played on SIUE,” Holten said. “I was very emotional, but in a good way, because my time at SEMO is coming to an end, so I wanted to make sure I gave it my all for the team.”

Nelson gave gratitude to her senior players and gave input on what Senior Night means to her.

“Senior Night is one of my favorite nights,” Nelson said. “I am thankful for the players we have and the contributions they have made the last four years.”

The Redhawks are back in action on March 26 when they travel to take on the Eastern Kentucky Colonels at 3 p.m.