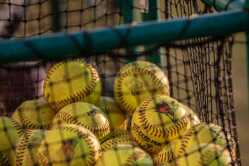 Softballs sit in a basket during a Redhawks practice.
Photo by Jan Salmon

A weekend of home runs, energy, and lockdown pitching helped Redhawks softball defeat Morehead State three games to none in a two day series on March 26 and 27. The scores of these were 8-0, 10-0, and 9-1 respectively.

Southeast poured in a total of nine home runs over the course of the three game series, knocking three out of the park in each game. Leading the team in this category was senior infielder Ashley Ellis, who accounted for four of the team’s home runs.

Ellis said when she's at the plate she is most concerned with playing her role on the team.

“The people in front of me get on base really well, so my role as a hitter is just to find a way to get them in and get some RBIs,” Ellis said. “If that's a home run, that's a homerun. If that’s a sacrifice fly, that's great. I'm just trying to do what I can to get those runners in.”

Along with the four home runs, Ellis drove in 10 RBI.

Redhawks coach, Mark Redburn, said this series was a game changer for Ellis.

“She's kind of coming off of a little pouch here where she's had some struggles,” Redburn said. “However, she was able to make some changes and just focus on some mechanical points there, and I think that was the biggest key. Now her confidence is back up.”

Behind Ellis was senior outfielder, Rachel Anderson, who hit two home runs, bringing in eight RBI, on a .415 batting average.

Anderson said her team’s energy played a huge part in their wins.

“The energy was through the roof and everyone was in game mode and was focused,” Anderson said. “There were some innings when we went scoreless, but we never got worried. We had each other's back.”

On the defensive side of play, the Redhawks’ pitchers only allowed a total of five hits through three games, in a combined effort, and Ellis had nothing but praise for them.

“I just think our pitchers are doing really well by taking a great approach and hitting their spots,” Ellis said. “They also have confidence in themselves and their defense behind them that we're going to make the plays if the ball is put into play. I think that excites us as the field even more.”

Moving forward, Southeast is set to take on Southern Illinois on Wednesday, March 31, and Eastern Kentucky on April 2 and 3 in a three game series, all at home.

The Redhawks are first in the Ohio Valley Conference with an 11-1 conference record, and a 14-10 record overall.