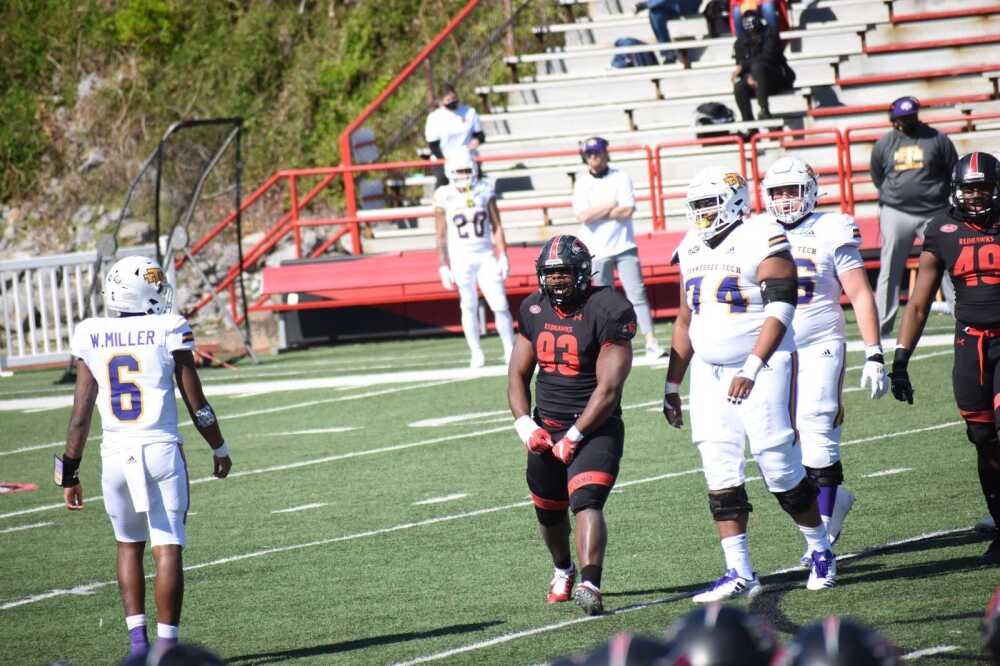 The Redhawks used a field goal just under five minutes into the fourth quarter as insurance in their 24-21 win over the Tennessee Tech Golden Eagles on March 28 at Houck Field.

Redshirt senior wide receiver Zack Smith carried the Redhawks offensively with 10 receptions for 173 yards and two touchdowns, including a 61-yard touchdown reception in the first quarter.

Smith attributed his success this season to the delayed start.

“Taking that year off football was hard,” Smith said. “Not knowing what to expect coming into the fall, and really working on my body, and getting on that JUGS machine everyday so I know I wasn’t gonna drop any balls.”

“I love him,” Matukewicz said. “I think we can win a championship with him.”

Matukewicz said a big reason the Southeast offense had success today was because Bunch hit his receivers on deep throws.

The Redhawks scored 21 of their 24 points in the first quarter. Matukewicz said the Redhawks stopped themselves several times on drives in the last three quarters.

“It was just one of those things where all of a sudden we lose yards and the drive gets stopped,” Matukewicz said. “We kinda stopped ourselves on several of those drives [and] that was what was frustrating.”

The Redhawks opened the scoring near the halfway mark of the first quarter when Bunch connected with Smith for an 8-yard touchdown pass.

Southeast would strike again less than three minutes later when redshirt sophomore running back Geno Hess ran the ball into the end zone from 13 yards out to push the Redhawks lead to 14-0.

Bunch and the Redhawks would cap off their big first quarter four minutes later when Bunch and Smith hooked up again, this time for a 61-yard touchdown.

Southeast was without junior running back Zion Custis, senior offensive lineman Ja’Chai Baker and junior wide receiver Aaron Alston due to injury. Matukewicz said his team has never seen this many injuries and believes it has to do with the lack of time for direct training.

“I think we really got to do a good job when the season ends of going back into the weight room and starting over from the foundation of strength,” Matukewicz said.

The Golden Eagles would put up 14 unanswered points in the second quarter and capped off the half with a 19-yard touchdown pass from sophomore quarterback Willie Miller to freshman running back Jordan Brown.

Southeast would not score again until just under 11 minutes remaining in regulation when junior kicker Kenny Doak split the uprights with a 23-yard field goal to give the Redhawks a 24-14 lead at the time.

The Golden Eagles would cut the lead to 24-21 with just over three minutes to play, but the Redhawks were able to run the clock out and secure their second win of the season.

The win moved the Redhawks to 2-4 on the season and 2-3 in Ohio Valley Conference play.

The Redhawks are back in action on April 3 when they travel to Martin, Tennessee to take on the University of Tennessee at Martin Skyhawks at 1 p.m.