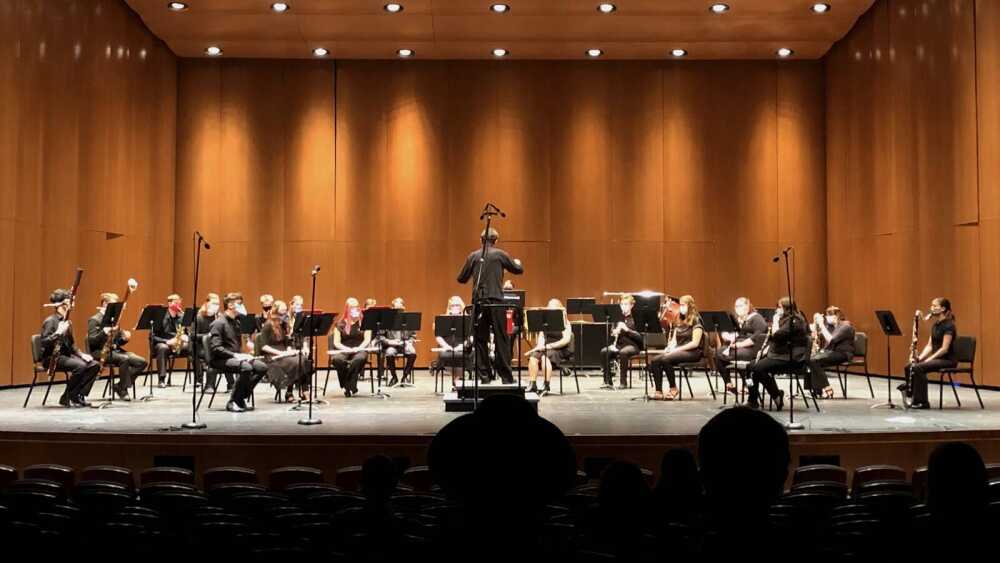 At the Bedell Performance Hall on March 2, Professor Robert M. Gifford (middle) conducts the soloist-heavy piece “Aria with Fughetta” for the woodwind section of the Southeast Wind and Percussion Ensemble.
Photo by Olivia Tock

On March 1 and 2, interim conductor Robert M. Gifford directed the student members of the Southeast Wind Symphony and Percussion Ensemble in their winter concert at Bedell Performance Hall.

This was not a typical concert at the Southeast River Campus, with mouthpiece cut-out masks, spittle rags, 30-minute rehearsal times and bell covers, the pandemic’s toll on the arts is still visible. Despite this, Gifford had a positive outlook on the circumstances, joking the ensemble even has an “official spritzer” — a student whose job is to kill the germs that come from the brass players’ spittle.

Friends, family and other audience members had the opportunity to listen to the brass and woodwind sections perform their own musical selections, in separate choirs. In the past, the sections performed in the concert together as a full ensemble, but due to COVID-19 social distancing restrictions, they were divided at this concert, playing their own smaller concerts.

The first performance was the brass choir, followed by the woodwind choir. Concluding the evening was a special selection from the TWABI Winds quintet, which combines the best of both worlds: brass and woodwind.

According to Shawna Creaser, sophomore oboe player in the ensemble, this was a big change.

“This is the first time I’ve had it split up where brass was doing their own thing and woodwinds were on their own,” Creaser said. “It was definitely a different experience for me.”

The new style of recital arrangement may not be a passing trend. Gifford mentioned the spring concert in May will use a similar approach to splitting up the ensemble. Additionally, since the performance is spread over three days, it will give more students in smaller ensembles the opportunity to perform and display their talents.

Gifford shed a positive light on this stumbling block created by the global pandemic.

“The pressures on the musician are much greater as the group gets smaller. If there are just five of us on stage, and one messes up, we’re done. Whereas if you have 30 or 40, a couple of people can mess up, and the rest of us will keep going and cover it up,” Gifford said. “It is sort of an accidental plus.”

Gifford noted using smaller ensembles allowed everyone to be a soloist. Performers like Ethan Penrod on tenor saxophone, got a taste of the spotlight during the songs played by the small ensemble woodwind choir, including, “Aria with Fughetta” and “Suite for Wind.”

Penrod’s mother, Debbie Penrod, said she found the performance quite entertaining despite the social distancing restrictions for both the audience members and performers.

“It’s usually everyone all together,” Debbie said. “They really had to separate it out, but it was still very entertaining, and I enjoyed it.”

Aside from the new learning curve for these performers affected by the pandemic, there were other special moments at the concert. Gifford said former student Josh LaMar, who now works at Cape Central High School, came to help with the concert band. Gifford also included the piece “Il Barbiere di Siviglia” in the program, which was arranged by honored alum Joseph Papus.

Despite the obstacles this ensemble is overcoming, the conductor and performers still want others to participate in their efforts by auditioning or visiting the River Campus and watching their shows. Sophomore Hollie Cotter, clarinet player in the ensemble, advised those interested in auditioning to reach out to members of the ensemble and talk to the professors. Cotter also shared some welcoming words to students on the main campus of Southeast, who may have never visited the River Campus before.

“We want people here to listen to the music; it’s important to share it,” Cotter said. “More people should come. Try new things.”

The Wind Ensemble will host their spring concert, “Wind Symphony and Percussion Ensemble: Series II,” at the Bedell Performance Hall, May 2-4. To purchase tickets, visit rivercampus.org/tickets/.