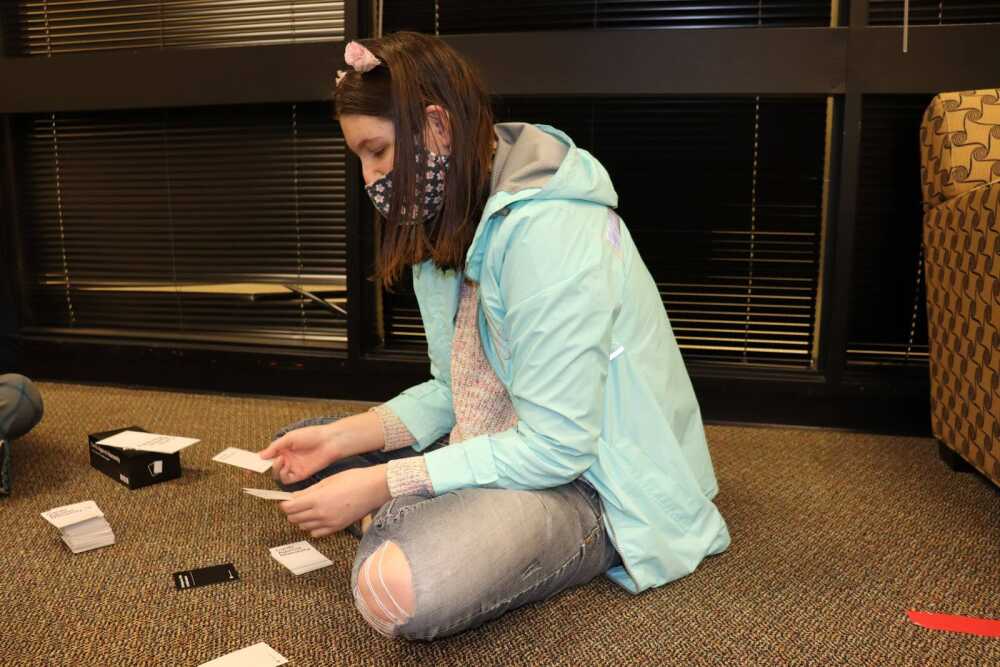 Elizabeth Pozaric dealing a round of Cards Against Humanity at a PRIDE meeting. Meetings are held every Thursday at 7 p.m. in the game room on the second floor of the University Center.
Photo by Kaylie Davis

An organization previously known as the Gay-Straight Alliance is making a mark on Southeast Missouri State University by providing students with an inclusive, judgment-free environment where they can learn about the LGBTQ+ community.

Timothy Schmidt is a professor of music and faculty advisor for PRIDE. Schmidt said the organization is multipurpose-focused and emphasizes social, education and activist components.

Schmidt said each meeting is different; some focus on meeting new people, socializing and playing board games, and some focus on educating students on LGBTQ topics such as rights, movements and important people.

According to Schmidt, PRIDE has been influential in campus changes such as advocating for a non-discrimination statement for LGBTQ+ individuals in Southeast’s sexual violence policy and designating gender-neutral bathrooms and dorms on campus.

According to Schmidt, the organization brings an element of expanded knowledge, experience and compassion to SEMO because PRIDE is one way students can gain experiences of inclusivity.

“Because we have a fairly substantial portion of our student body who do not come from large cities, PRIDE is one way students can gain experiences of inclusivity that they may not have had the chance to experience in smaller cities,” Schmidt said.

Southeast sophomore Dusty Whitehead is the president of the PRIDE club. Whitehead said the organization is a safe space for students to interact with each other.

“[Students] will come in the first meeting and look nervous because they don’t know anyone,” Whitehead said. “Second meeting, they just come in and chill, like weights have been lifted off their shoulder.”

Sophomore Elizabeth Pozaric said PRIDE is inclusive of all students.

“[PRIDE] has a very easy-to-talk environment,” Pozaric said. “I feel like when I talk to them, they’re gonna listen.”

In the past, PRIDE has hosted events such as professional and amateur drag shows, an animal show called “Strut Your Pup” and floating movie nights at the Rec Center.

Meetings are held each Thursday at 7 p.m. on the second floor of the University Center in the game room.

To learn more or to join PRIDE, email semopride1@gmail.com or Dr. Timothy Schmidt at tschmidt@semo.edu.