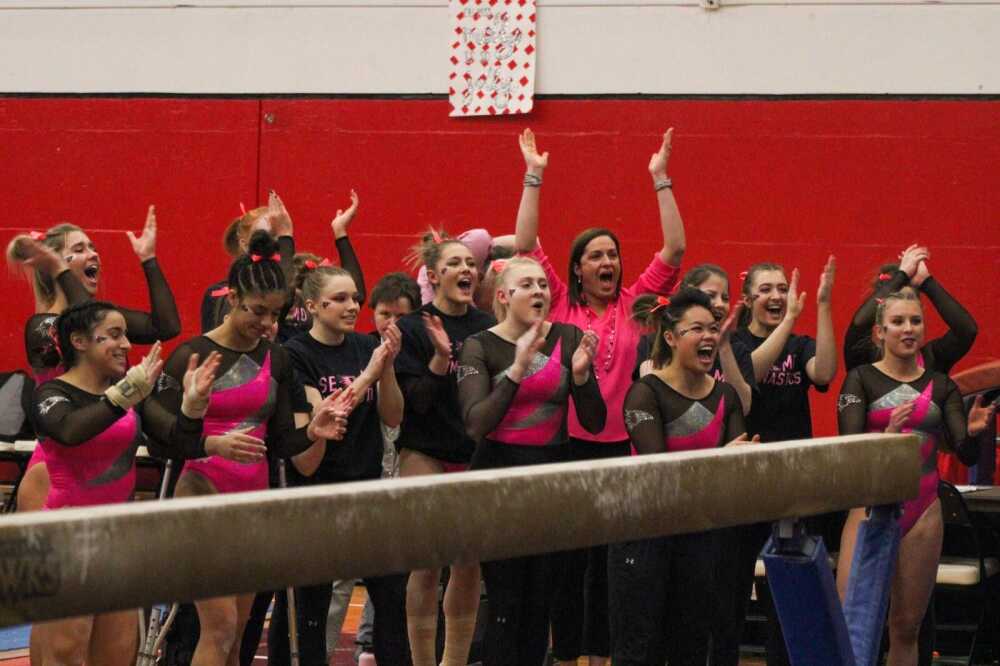 Ashley Lawson (pink shirt) and the Redhawks celebrate during a win over Lindenwood on Feb. 7, 2020, at Houck Field House in Cape Girardeau.
Photo by Jelani Days

Southeast gymnastics are nearing the conclusion of their third season under the leadership of coach Ashley Lawson. Lawson was recently awarded the Midwest Independent Conference Coach of the Year for the 2021 season, making her the winner in back-to-back years.

Lawson said she was surprised to receive the honor and said it was special that other coaches in the conference felt she was deserving.

“We have a great bond as a group of colleagues,” Lawson said. “For them to agree that I was deserving of this award is pretty special, for sure.”

Senior all-around gymnast Lindsey Bates said Lawson focuses a lot on the culture of the program, which has been key in their success and is what makes Lawson different from other coaches she’s had.

Southeast Director of Athletics Brady Barke said the university has great coaches, and Coach Lawson is “certainly” one of them.

“Her being an alum and having an accomplished career that she had as a student-athlete I think brings with it this pride in the institution and in the gymnastics program,” Barke said. “I think that adds to her unique ability to lead.”

Barke said the turnaround orchestrated by Lawson has been as good as he has ever seen.

“We have had some really good gymnasts that she has been able to bring in that have helped the program,” Barke said. “I think a lot of their success has been a result of just kind of changing the culture in that program and getting that love of gymnastics back for some of them, and we’re seeing their performances improve as a result.”

Lawson credits having the right people in place and recruiting for the quick turnaround the gymnastics program has seen.

Lawson said without her athletes buying into her “crazy antics” and sticking to the goals they set as a team, she would never see this type of award.