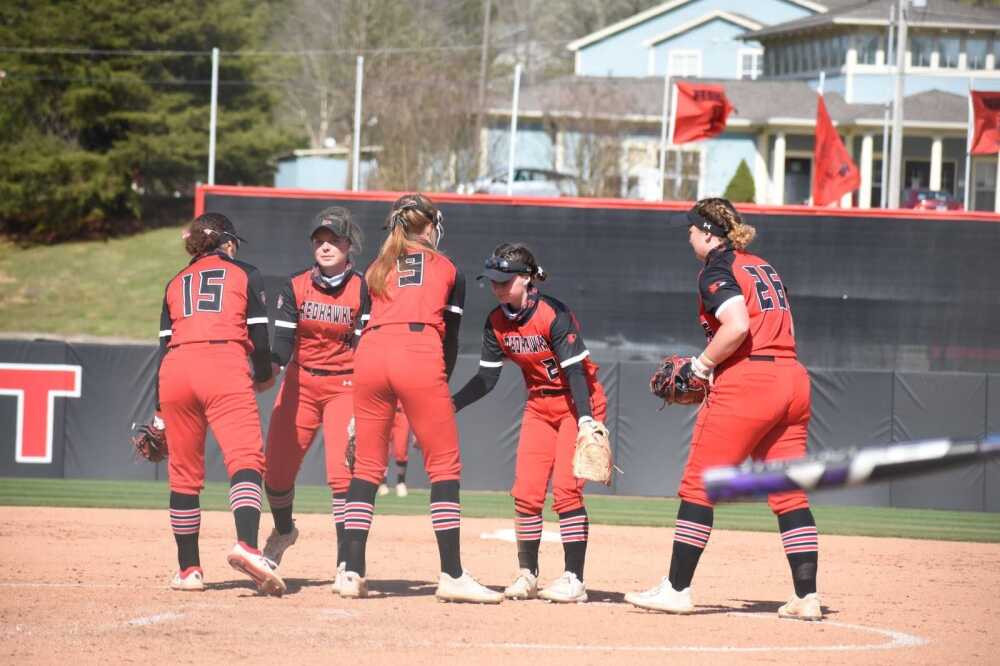 The Redhawks meet in the pitcher's circle prior to the start of an inning during a 5-0 win over Southern Illinois on March 31 at the Southeast Softball Complex in Cape Girardeau.
Photo by Caleb Burris

Southeast softball pushed their Ohio Valley Conference record to 13-2 following a series win over the Eastern Illinois Panthers on April 2 and 3. Southeast sits in first place in the OVC, and the Redhawks are 17-11 overall.

SEMO faced the Panthers Friday, April 2, and won 7-0. The offensive outburst by the Redhawks was led by senior first baseman Ashley Ellis who hit two home runs in game one. The win pushed Southeast’s win streak to nine games.

The first game of the double header remained quiet for the Redhawks up until the bottom of the third inning when sophomore shortstop Alyson Tucker launched a solo home run into left-center field to open the scoring for the Redhawks.

“For that hit, I was just happy to barrel up a ball,” Tucker said. “The previous game, I hadn’t had much success in the batter’s box, so just barreling up a ball felt good, and putting my team on the scoreboard felt good, as well.”

The Redhawks went on to win the first game 3-0 behind a complete game shutout performance by freshman starting pitcher Paytience Holman.

Extending their win streak to 10 and leading the series 2-0, the Redhawks attempted to go for the sweep against Eastern Illinois following the first game Saturday.

The game remained scoreless up until the bottom of the fifth inning when freshman outfielder Kimmy Wallen came off the bench and drove in a run with an infield single to get SEMO on the board.

“I feel like we were outplaying EIU 19 out of the 21 innings,” Redburn said. “We just had two innings there where it was a little bit of a meltdown, and it was some simple, basic things that we beat ourselves on.”

Even though the Redhawks did not come out victorious the second game of the double header, Redburn said snapping the win streak helps by bringing the players back to reality.

“Even though we won the series against a tough opponent in our conference, it gives us a back-to-Earth reality check,” Redburn said. “We’ve got to go out there and get a little bit more solid defensively and offensively in running the bases and communication.”

The Redhawks saw the win streak as a positive, not only for the team record, but for the team's morale, as well.

“I think it united our team very well, and that we were playing more together,” Tucker said. “We’re a new team, so there’s a lot of new people on the field. So the unity and trust for each other has gotten so much better.”

The Redhawks look to get back in the win column as they travel to Kansas City to face the Kangaroos on April 7 for a double header.