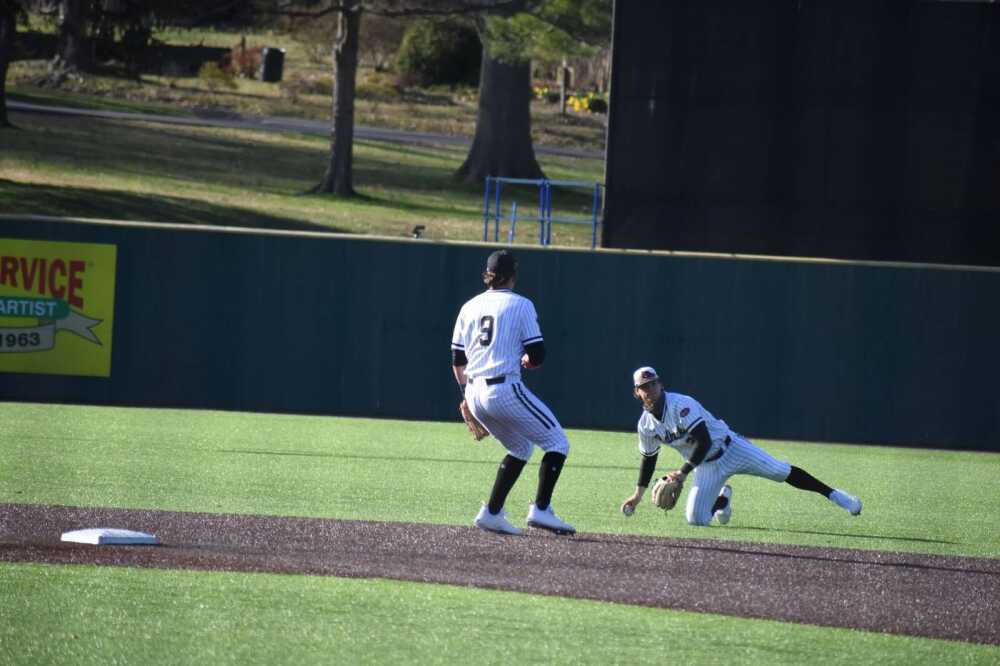 Senior infielder Connor Basler fields the ball from his knee during Southeast's 6-3 win over Austin Peay on March 19 at Capaha Park in Cape Girardeau.
Photo by Caleb Burris

Correction: The use of WIFFLE has been updated to reflect its trademark status.

Experience is something that can never be taken away, and graduate student second baseman Connor Basler has a lot of experience when it comes to baseball.

Basler has played in more than 200 collegiate games throughout his career but got his start in baseball long before that.

“I first started, I feel like how every other kid starts, in T-ball,” Basler said. “I pretty much just remember taking ground balls or hitting with a WIFFLE ball bat in the backyard with my dad. After that, I've pretty much been involved with the game ever since.”

Basler started and lettered all four years of his high school career at Valle Catholic in Ste. Genevieve, Mo. During his sophomore through senior years there, Basler was named to the All-Conference, All-District and All-State teams. In his time there, he helped lead the baseball program to three consecutive state titles.

Due to his love of the game, he settled on baseball over football and basketball.

“I ultimately chose baseball because that was my first love,” Basler said.

In his early days at SEMO, Basler was looking to get a role on the team. Even though he did not get the opening day start as a freshman, he played in 54 games and started 53 at shortstop.

“Whenever Coach told me that if we were to start the season right now I'd be starting at shortstop as a freshman, I was kind of dumbfounded. I didn't really believe him,” Basler said. “Then opening day came around, and I actually didn't start opening day my freshman year, but since then, I pretty much started close to every game.”

He uses this experience to guide the younger players on the team to their ultimate goal of winning an Ohio Valley Conference title, something very important to him.

“I've been here for four years before this, and we haven't won a conference championship yet, and that's our goal this year,” Basler said. “I feel like I can definitely lead all the other people and the younger guys to our ultimate goal.”

Sophomore outfielder/catcher Andrew Keck said playing Division 1 baseball is not easy, and baseball in itself is not easy, especially when you are facing top players.

“Having a guy like [Basler] that's really able to slow down the game and kind of help guide you is awesome to have not only as a team but from a singular player aspect, as well,” Keck said.

Southeast coach Andy Sawyers had high praise for Basler and what he brings to the team.

“He's played a ton of baseball games, and he's got a lot of experience,” Sawyers said. “It's nice to have a guy on the field in the middle of the diamond playing that has so much experience in so many games played. He's like another coach on the field for us.”

Basler and the Redhawks are back in action April 9 when they travel to Murray State to take on the Racers at 5 p.m.