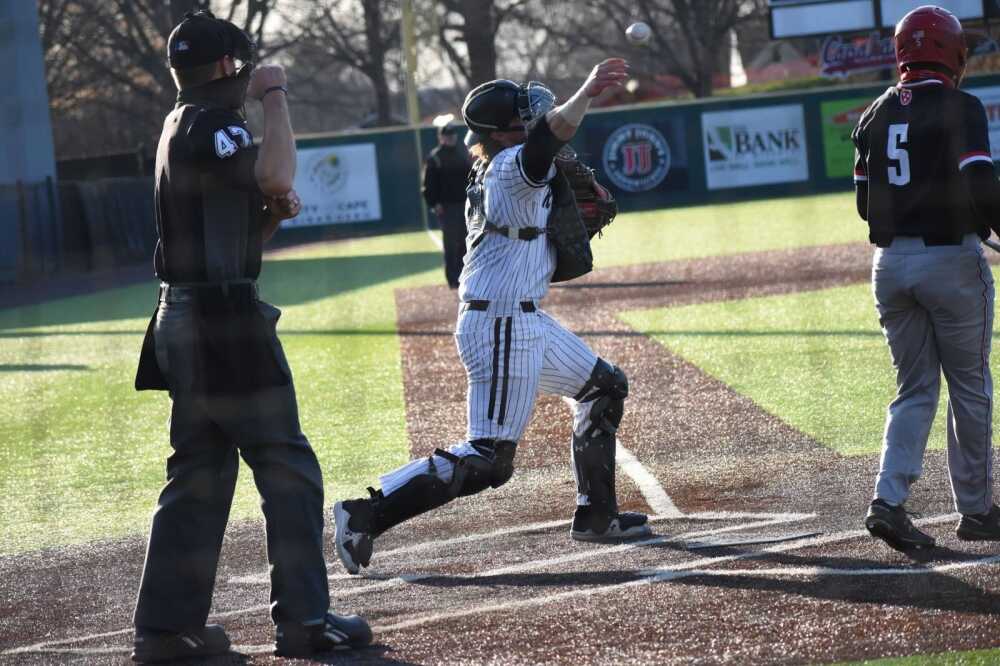 Redshirt sophomore catcher Wade Stauss is the hottest-hitting baseball player on a talented SEMO baseball team. Stauss leads his team in home runs having six long balls through 22 games played this season. He also has 17 runs batted in to complement his home runs.

Stauss said a lot of his power comes from a strong weightlifting routine.

“I have been able to put on weight over the past year lifting weights,” Stauss said. “My strengthening coach does a good job of giving quality workouts, and I have been enjoying that. It has been paying off on the baseball field.”

With leading his team in home runs, Stauss knows he needs to be focused on making good swings on fastball. Stauss said driving in runs is his main responsibility offensively.

“When I go up to bat, I just try to put a good swing on the ball,” Stauss said. “I also try to be ready for the fastball.”

Stauss has made more in-game adjustments to better his defense and offense this year and tries to improve with each game. He said he can better adjust his approach for hitting based off of what pitches he sees.

“Offensively, I am able to change my approach by recognizing how pitchers are trying to throw to me,” Stauss said. “Defensively, my in-game adjustments have helped me realize how to help out my pitcher if he is doing something wrong.”

“Wade’s ability to throw the baseball more accurately to second base has helped our team get difference-making outs,” Sawyers said.

Though Stauss has seen success this season, his college baseball career hasn't always been easy. During his sophomore season, Stauss suffered a concussion which put him out for the year.

Sawyers said he was impressed with the way Stauss performs despite injuries and shortened seasons.

“Wade has always been a good hitter even as a freshman, but unfortunately, he was out for his sophomore season due to injury, and then last season was cut short, so he hasn’t been able to play a lot,” Sawyers said.

Sawyers had high praise for how Stauss was able to persevere and have a great season thus far.

“He is a great teammate, a hard-worker and has great character,” Sawyers said. “This is what separates him from other players in the OVC conference that we play in.”

Stauss and the Redhawks are back in action April 9 when they travel to take on the Murray State Racers at 5 p.m.