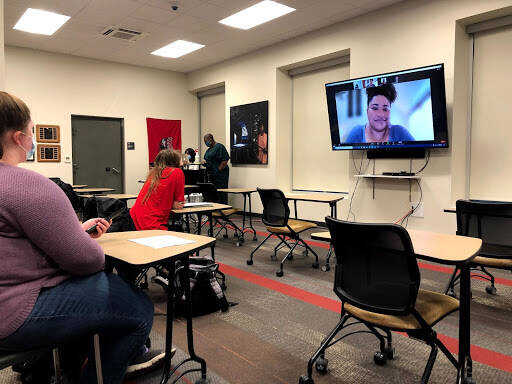 Students listen to Marquita Robinson during the viewing party at the 25th annual Michael Davis lecture at the Rust Center for Media at 6 p.m., April 7. The lecture is held every year to remember journalism student Michael Davis and shed light on the struggles People of Color face in the media industry.
Photo by Cassie Meyers

These are the words screenwriter and producer Marquita Robinson used to describe herself at the beginning of her talk at the 25th annual Michael Davis Lecture. The event took place April 7 over webinar. During it, Robinson spoke about imposter syndrome and struggling for success, specifically in the TV and film industry as an LGBTQ, Black woman.

Robinson has worked on the nationally-televised productions “New Girl,” “Black-ish,” “Glow” and many others. At the lecture, she discussed struggling with mental health issues as a Black, LGBTQ woman working in the TV and film industry and owning your vulnerabilities.

“You’re not only good enough, you’re overqualified just by living and breathing and carrying on as you are,” Robinson said.

TV and film student Rachel Grubbs attended the Michael Davis lecture for the first time. Grubbs has a passion for screenwriting and said while listening to Robinson, she learned new paths she could take to move up in the industry.

“I’ve really been thinking, ‘Do I need to go to film school? Do I need to get a Master’s in screenwriting, which I would need to go to Austin for? Do I need to make all these big life changes in the next year, two years?’ And for her to tell us, ‘Not necessarily. Both ways are difficult, but you can still do it.’ That was so helpful to me,” Grubbs said.

The Michael Davis lecture is held every year in honor of journalism student Michael Davis who died in a hazing incident in 1994. He was a friend of Department of Mass Media Chair Tamara Zellars Buck, who helps organize the event every year.

“Bringing people who give us a glimpse of who Michael might have been, that is very important to me. But beyond all of that, I believe that diversity and inclusion are topics that we really need to bring to the forefront,” Buck said.

The lecture is held yearly to help bring awareness to the struggles of African Americans in the media industry and help students as they begin their careers.

“I feel as if having this lecture enables us to have a meaningful dialogue with our students by allowing them to hear from people who look like me who are in the industry,” Buck said.

TV and film and advertising student Molly Galik praised Robinson on the lecture and said through it, she learned how to better connect and work with People of Color.