Clearing the air: “Ask a Blank” Event by SGA Diversity and Inclusion Committee 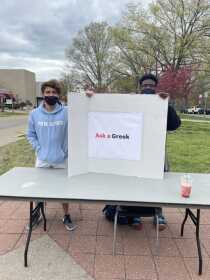 Co-organizer of the “Ask a Blank” event, Justin Tuschoff (left), and Theta Xi representative Kelvin Johnson at the “Ask a Greek” table on April 8.
Photo submitted by Nur Anika

Throughout the past week, you may have seen tables and tents set up between Kent Library and Academic Hall. The Student Government Association’s Diversity and Inclusion Committee set up a variety of “Ask a Blank” booths to allow students to ask questions about different groups on campus.

Nur Anika, junior and co-organizer of the event, said the Diversity and Inclusion Committee organized the event as a way for students to learn about different demographics of people on campus.

“We should always educate ourselves,” Anika said. “We live in a diverse community, and we should learn about different people around us.”

Justin Tuschoff, co-organizer of the event, president of the Interfraternity Council and member of Phi Delta Theta, said he wanted to give students outside of Greek Life the opportunity to learn about the Greek community.

“If you read the titles, it says that we’re social fraternities, but we do so much more,” Tuschoff said. “We fundraise for philanthropies, we volunteer for events, my fraternity, we do food drives every other week for a local food bank.”

Tuschoff said fundraising during Greek Week can raise from $5,000 to $10,000 for community organizations, including Boys & Girls Clubs of America and One City.

“There are people here who are like them,” Whitehead said. “Just so everyone knows there’s at least one person on this campus that they could come to if they needed to.”

The “Ask a Blank” event is held each spring. To learn more about the Diversity and Inclusion Committee and other Student Government-sanctioned events, SGA meetings are held on Mondays at 8 p.m. in the fourth-floor ballroom of the University Center.