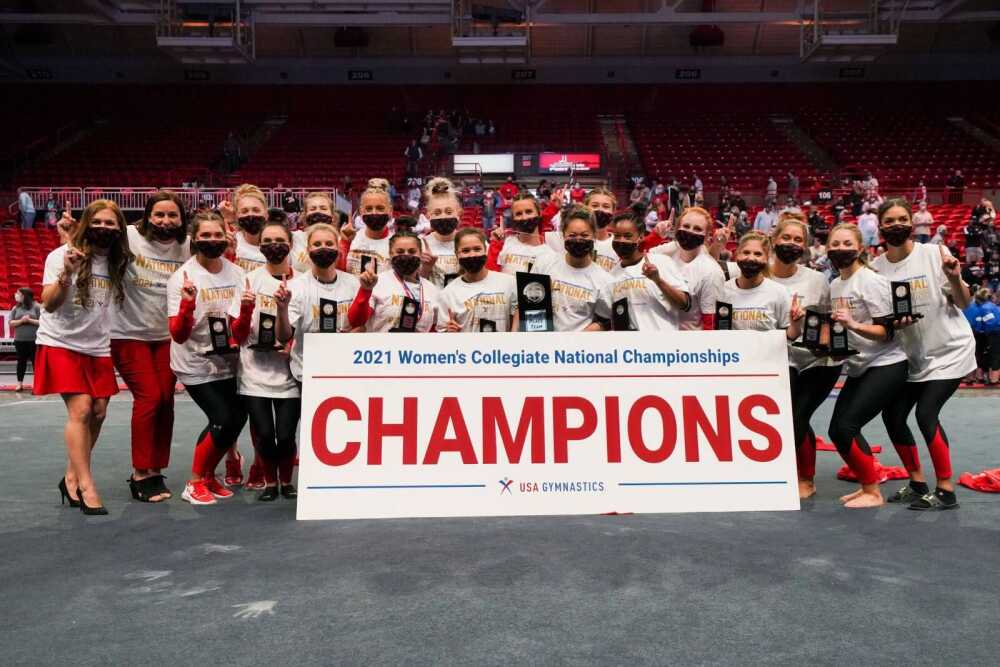 The Redhawks flew above the rest on their way to their first-ever National Championship when they squared off against the Air Force Academy, Centenary College, Lindenwood University and Texas Woman’s University in the USA Gymnastics Women’s Collegiate National Championship on April 10-11. As a team, Southeast scored a total of 195.025 points, enough to edge out Lindenwood, who finished in second place with 194.875 points.

SEMO hosted the competition here in Cape Girardeau at the Show Me Center, and junior Anna Kaziska said it was special to be able to win in front of their home crowd.

“A lot of us thrive off of the energy,” Kaziska said. “So, I think that helped with all of our performances.”

The Redhawks opened up competition on their floor routine, scoring a total of 49.075. Kaziska led the way for SEMO with a score of 9.900, followed closely by sophomore Dahlia Solorzano-Caruso, with a score of 9.850. Southeast then posted their season-high point total on vault with a score of 48.900. Senior Micheal Sanders and freshman Lydia Test both put up personal record scores of 9.800 and 9.750, respectively.

Redhawks coach Ashley Lawson said the team started out on a high note with their floor and vault performances.

“They really did it when it mattered,” Lawson said. “We were sitting really nicely going into our bye and then our bars rotation.”

SEMO moved onto the uneven bars after their third rotation bye, where they posted a point total of 47.675. Sophomore Jolie Miller paced the Redhawks with a score of 9.825 and was followed by Solorzano-Caruso, who scored a 9.800.

Heading into the fifth and final rotation of the day, Southeast trailed Lindenwood by .075 points. Southeast finished on the balance beam, where they tied the program record of 49.375, which put them ahead of Lindenwood and earned them the National Championship.

Lawson said she knew it would be a close one between the Redhawks and the Lions, and Southeast came in clutch.

“We were on our best event and they were on their best event, so it was a matter of who hit,” Lawson said. “Our beam team came out and tied a school record, so they definitely saved their best for last.”

“My freshman and sophomore years, it felt like I got second place in whatever I did,” Kaziska said. “I wanted to win so bad, so I’m glad that was the outcome.”