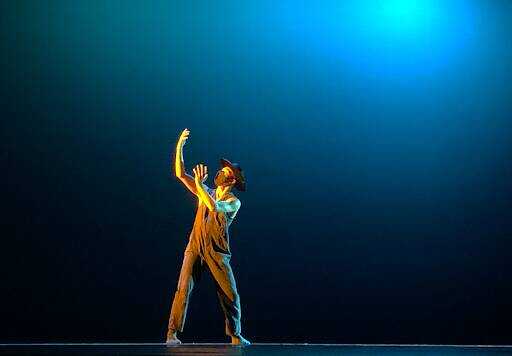 Freshman Nathan Krueger performs in the dance “(Don’t) Tell Me How It Ends,” choreographed by guest artist Joshua Blake Carter at the Bedell Performance Hall April 8.
Photo by Olivia Tock

As the student dancers waiting behind the stage’s curtain prepared themselves to showcase their talents, a hum of excitement buzzed in the audience. The dancers amped up for the feature piece by a special guest choreographer, Joshua Blake Carter, for the annual Spring Into Dance performance in the Bedell Performance Hall of Southeast’s River Campus on April 8.

Since 2011, the Southeast Conservatory of Dance has hosted this performance with the goal of displaying the different dance styles the Bachelor of Fine Arts students are trained in, while highlighting works by faculty and student choreographers. The main event of this year’s show was the work of nationally-recognized choreographer Joshua Blake Carter.

The headliner performance was called “(Don’t) Tell Me How It Ends,” choreographed by Carter, whose award-winning work has been commissioned by several dance companies. He is currently the director of Giordano II, the second company of Giordano Dance Chicago, which he danced with for many seasons.

“We have known him for a couple of years, so it’s a connection, a friend that we knew was a really solid choreographer, and we wanted to bring down to work with our students,” Peterson said. “We love his choreography, we love his teaching style, we knew he’d be a good kind of role model and person to interact with our students, so we invited him to come.”

Carter rehearsed with students at Southeast for four hours each day for a week. On the weekend, he led 10-hour rehearsals. During this time, he also taught masterclasses and auditioned dancers for his piece. Edgecombe said this process is the norm for these dancers, and it will prepare them for their future careers.

Audience members, performers and faculty alike agreed Carter’s piece was their favorite. It utilized futuristic electronic music by artists Scanner and Frank Bretschneider, combined with contrasting lighting to create a display audience members Cora Williams and Caitlin Reese called “very powerful.” Statements of life, death and suffering were included in Scanner’s song “Exhale” and were accentuated by the movements of the dancers.

Edgecombe shared his feelings about the piece.

Juniors Alice Angers and Cheridan Couty, who are both dancers and student choreographers, said they enjoyed Carter’s classes, and it was fun and incredible to see his piece all together. They also said their experiences of both performing and choreographing in this year’s show were exciting, but the preparation took many long hours.

“We wanted to create something different,” Anders said. “We have to audition these works to the faculty, and out of, I think, 14 works, ours were selected.”

Anders choreographed the piece “A Look Within.” Couty said her piece, “$,” was originally created as her audition for a scholarship. They said there is a lot of work put into an event like this and want to encourage others to come to the River Campus to see the results of their long hours of rehearsals.