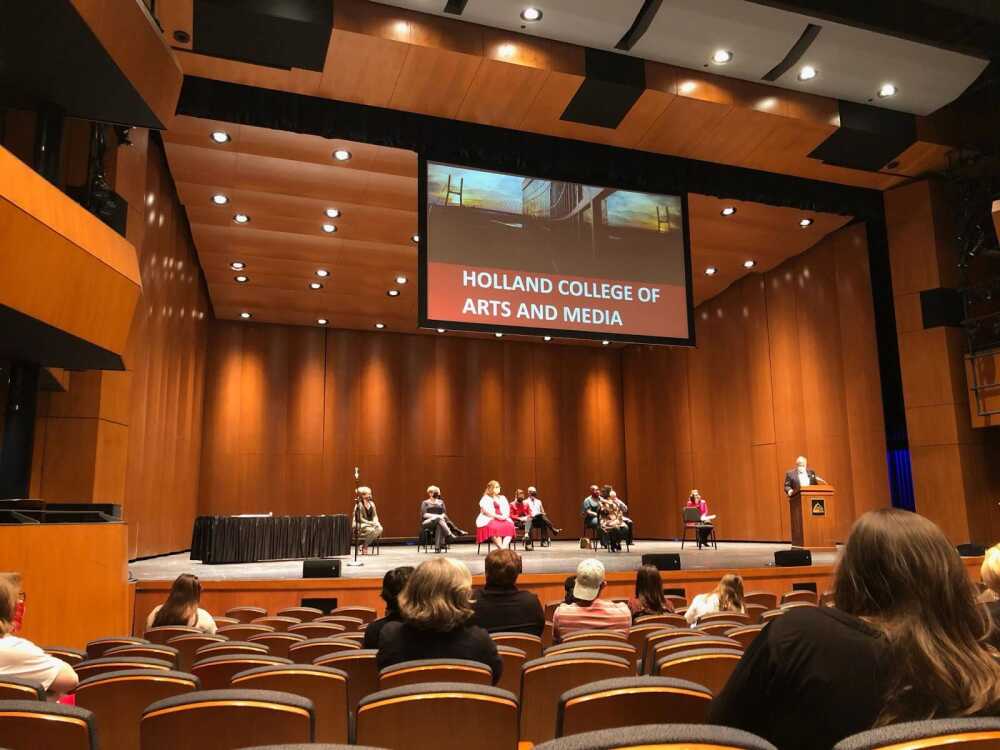 The Holland College of Arts and Media hosted an award ceremony for their participating members on April 22, 2021. Faculty, students, and staff members received awards for their commitment and dedication to the work in the college.
Photo by Hannah Radden

*Editor's note: The author of this story received the Outstanding Students Award during this event.

Faculty, staff and students joined together to celebrate the fourteenth annual Holland College of Arts and Media (HCAM) award ceremony in the Bedell Performance Hall on April 22, 2021. The Holland College has had this ceremony every year since the River Campus opened in 2007.

Bedell was filled with kind words from awarding participants, celebratory applause for winners and overall recognition from all Holland College departments.

She has worked closely with all types of mass media students, especially in multimedia journalism. She currently teaches classes on audio, video and written component materials.

While she did not receive an award, she said it’s an incredible opportunity to award deserving people.

“Anything that recognizes talent, hard work and commitment to the institution and the department, I think we should always praise,” Stepaniuc said.

Stepaniuc filled the position for assistant professor of mass media after Bruce Mims retired in 2018. Mims received an award at the Holland College ceremony and accepted the Lifetime Award for College.

Mims worked in the mass media department from 1989 to 2018. He helped grow the department and created many opportunities for students, especially in the audio department.

He co-wrote the textbook “Keith’s Radio Station,” which is still used today for the course Sound for Media in the multimedia journalism option. He also furthered the development for KRCU to be on SEMO’s campus and developed student partnerships.

Stepaniuc said filling his position felt challenging in the beginning, but she feels she is getting a better hold of what the position entails.

“I’m extremely proud of my students and their commitment,” Stepaniuc said. “This year was the first time we won on audio shows and video shows, and that pertains to a lot of the hard work they’re doing in both of my production classes. I wish in 30 years, my students or my colleagues can say the same beautiful things about me that they said about Mims today.”

Senior Allison Newman received an award for Outstanding Graduating Senior for her BFA in dance. She said she found out about the award last week but still had an unexpected feeling before accepting.

“All of the seniors in dance are pretty close, and all of us are really involved. I don't think any of us really knew who it was going to go to, so I was honored that they chose me,” Newman said.

The major option of Bachelor for Fine Arts in Dance has been cut and will no longer be in the Southeast curriculum starting in the Fall 2021 semester. The current class of Spring 2021 freshmen in dance are the last to receive the BFA degree from Southeast.

For lower classmen seeing her receive this award, Newman said she would give the advice to always advocate for yourself.

“The first thing that both Kenneth Stilson and Hillary Peterson said to me my freshman year was, ‘You get as many opportunities as you make,’ so you have to make those opportunities for yourself,” Newman said. “I think especially as dancers, there's a discipline expectation, so we all tend to kind of take a more passive place because we want to further our career, so you want to be respectful. There's a way to be respectful and still advocate for yourself, and I think that is really important.”

Newman said this is half of the reason she has gotten so many opportunities and has seen success through this method.

Newman said she was successful in the dance program because she was willing to speak her mind and get involved with the help of her advisors.

While the decision is still final for the cut of this degree, Newman said receiving this award for the BFA in dance left her with a bittersweet feeling.

“So, to be completing a BFA and to be recognized as the Outstanding Senior completing her BFA, there’s definitely some pride that goes with it, and I think it's bittersweet to think that there's only three more classes of outstanding BFA in dance after,” Newman said.

Another outstanding graduating senior at the ceremony was Allison Otto. She accepted the award from the Department of Mass media on Thursday.

Otto is an advertising student and the president of SE Creative. She said she has always been a creative person and knew advertising would be a great career path for herself.

“I tell people that I made the decision to go into advertising because I wanted to eat after college and have money,” Otto said. “So I didn't want to go into things like painting, photography, or anything. So I wanted to use my talents in a different way. So I chose advertising.”

Otto said one professor who helped guide her through her college career was Professor Michael Simmons, who was also nominated for the Outstanding Teaching award. Otto worked closely with Simmons because he was the first advisor she had in the major. She said their collaboration together in SE Creative also helped her.

“I always know that I can go to him for advice if I need it,” Otto said

The following awards were given at the ceremony with impactful speeches to celebrate each winner.