During the COVID-19 lockdown last spring, freshman Caleb Baker fell into an Internet rabbithole of learning about coffee — ethical practices, latte art and coffee tasting. A hobby he calls “nerdy” but “fun,” Baker said he felt fascinated researching injustices in the coffee industry.

Baker said his new-found interest soon grew into a love for everything about coffee, attracting him to apply for a job at Baristas Coffee Bar in downtown Cape Girardeau.

Baker started his coffee career at Dunkin’ Donuts in his hometown of Memphis, Tenn. As a high schooler, Baker said he searched for a job to work with his unique schedule. He often attended practice for theater productions in the afternoon, so an after-school gig wouldn’t be possible. He chose to work early-morning shifts at Dunkin’ before school in the morning.

During this time, Baker said he’d experiment with latte art while creating drinks for customers. While the milk foam machines at Dunkin’ weren’t ideal for creating art, he said it helped create a starting point for his hobby. When he moved to Cape in Fall 2020 to attend Southeast, he applied for a job at Barista’s.

Baker said he loves his job. 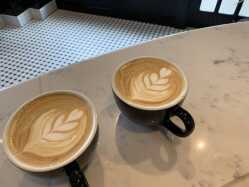 Baker said he enjoys creating latte art customers, as it provides a fun “surprise” element to their java.
Photo submitted by Caleb Baker

“It’s been a lot of fun,” he said. “My favorite part is the people … but, yes, the coffee’s great, and the free coffee is great.”

To create a smooth design on top of a drink, Baker said he starts with a cup of espresso and steamed milk. The milk steamer machine creates a whirlpool in the milk, forming a micro-bubble foam with a smooth texture.

“That starts to break down the bubbles and fats within the milk,” he said. “Basically, you want to end up with this micro-bubble foam, which has a velvet, paint texture.”

He begins by pouring the milk into the espresso from a high spot, tilting the cup, rotating the milk in a circular motion. This mixes milk and coffee, Baker said, and prepares the drink for the art.

That’s when the real magic happens: Baker lowers the milk pitcher as he’s pouring, splitting the foam and the coffee in the mug. The small bubbles in the foam sit on top of the coffee, Baker said, and create the distinctive design. He manipulates the angle of the cup to create a heart, rosetta or tulip design. 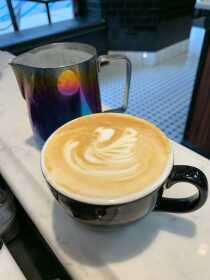 He arrives early to Baristas to practice latte art prior to the coffee shop’s opening. He takes a picture of each day’s creation; pictured above is a swan.
Photo submitted by Caleb Baker

Those three basic designs can be combined to create something a bit more complex, he said. His favorite is the swan — it’s a combination of a rosetta and heart designs. It was the most difficult to learn, he said, but receives the most positive feedback from customers. Another barista at Baristas has mastered the dragon design, which he said he admires.

“She does it very rarely, and only when she’s in the mood,” Baker said.

One of the most rewarding aspects of the position at Baristas is interacting with members of the community, Baker said. The Memphis native said it’s given him an opportunity to feel more integrated into the community and learn more about Cape Girardeau.

“I walk around Target and Walmart, and people will come up to me and say, ‘Oh, you’re that barista!’” Baker said. “I am that barista.”

When practicing latte art, he said he loves to surprise customers with a new design when they visit. He never receives requests for specific designs, he said, but the detail in their cups are often the reason they return to the cafe.

At Baristas, he said obtaining ethically-traded coffee beans is important. The coffee shop uses Kaldi’s Coffee, which is based out of St. Louis and pays above market value to farmers, he said.

Baker is continuously refining his barista skills and growing as a latte artist. While Kaldi’s usually trains baristas, he said classes hosted by the St. Louis company have been paused temporarily due to COVID-19. He looks forward to learning more about the art of latte designs when they resume.

He has an espresso machine set up in his Southeast dorm so he can practice in his spare time. Someday, he anticipates opening his own coffee shop; while he’s majoring in musical theater now, Baker said coffee is a strong Plan B. 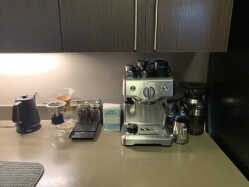 Caleb Baker keeps an espresso machine and coffee equipment in his Southeast residence hall so he can practice at any time of day.
Photo submitted by Caleb Baker

He’s still building on that dream; he arrives early to Baristas before each shift to practice latte designs.

It’s a win-win, Baker said; he gets to practice his skill and drink it, too.