A look back on Don Berry’s Hall of Fame Career 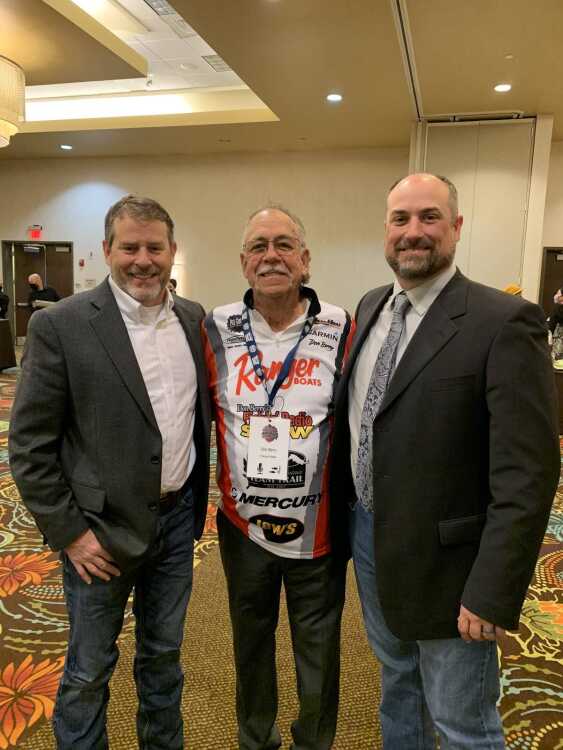 Scott, Don and Sutton Berry pose for a photo at the Outdoor Sports Luncheon Feb. 25.
Photo submitted by Sutton Berry

A common saying when it comes to fishing is “a bad day of fishing is better than a good day at work,” and fortunately for Don Berry and his sons Scott and Sutton, fishing is part of their job. With his recent induction into the Missouri Sports Hall of Fame for fishing, Don has made a mark on the fishing world.

Berry’s parents were the ones who got him hooked on fishing. His love for fishing only grew stronger until it turned into something much more.

“I started pond hopping all over the area around Advance, Mo., and they would produce some bass, and I just kind of kept [collecting] the tackle and stuff like that,” Berry said.

In 2002, Berry retired from education and went into fishing full-time with the Central Pro-Am Association. While he was there, he was approached by a representative of a local radio station in Springfield, Mo., who asked Berry if he would be interested in doing a radio show.

At first, his show was called the Fishin’ Radio Show and was later renamed Don Berry’s Fishing Show. Both of Don’s sons, Scott and Sutton, have been co-hosts on the show with their father for many years. Not long after, Berry and his sons founded the Ozark Mountain Team Trail, a 100% payback team tournament they started in 2007.

“When Dad started the radio show back in 2000, I was actually on the show with him every week for 14 years,” Sutton Berry said. “He helped pave the way for the foundation that was there, and to hear comments from anglers and sometimes hear the feedback from him that anglers have told him that we're doing a good job with it, I mean, it's been amazing.”

Both Scott and Sutton were glad to take over the family business and to help grow not only the radio show, but the Ozark Mountain Team Trail, as well. The winning team receives all of their entry fee and some back in prizes. In their very first tournament, they had 67 boats. The number has grown over the years to well over 100 boats per tournament.

“From the beginning of the business, you know, we had no idea where it was gonna go [and] what it was going to grow into,” Scott Berry said. “So, it's pretty exciting for me and my brother to be able to carry on the tradition of the family business.”

Don was able to watch his high school basketball coach and mentor Carroll Cookson be inducted to the Missouri Sports Hall of Fame along with many other peers. In the 21 years doing the radio show, he has interviewed more than 800 different guests.

“It just kind of just topped everything off to be inducted,” Berry said.

Berry said for anyone who wants to start fishing or become better, do the research and study the information presented to you.

“Starting out is the basics to everything right now, and my suggestion is if you want to start tournament fishing, get with somebody that has experience,” Berry said. “Watch the shows that you see on TV, get you some good subscriptions to some magazines, and read that information. Then being a companion to somebody that fishes team tournaments, that works out really really well for someone who is just getting started because they learn the techniques and how to catch fish.”

You can find Berry’s company on Facebook by searching Ozark Mountain Team Trail.