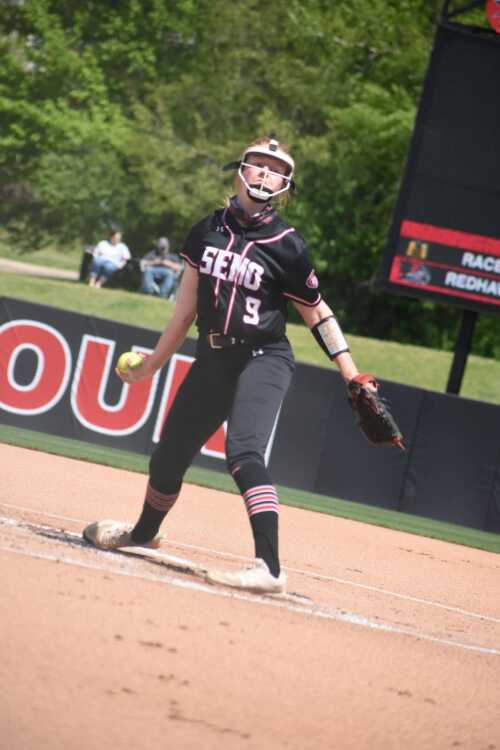 Redhawks softball earned their fourth series sweep of the season in what Southeast coach, Mark Redburn, called dog fights on May 1 and 2. The Redhawks battled it out with Murray State in three games, taking all three with scores of 1-0, 7-5 and 3-2 respectively.

Game one was tied 0-0 until the bottom of the 7th inning when Southeast freshman outfielder Kimmy Wallen drove in the winning run with a two out single.

Southeast junior pitcher Rachel Rook said she knew all along that she and her team would have to fight hard to get a series win over Murray State.

“We knew coming into the weekend that it was gonna be a tough series,” Rook said. “Murray State is a good team that has really good coaches, so we were not expecting it to be easy.”

Rook earned two wins and a save in the series, pitching a complete game in games one and three. She struck out 20 batters and only walked one over the course of the series.

Senior outfielder Rachel Anderson, who hit a home run in the second game of the series, said the key to pulling off the victory in the midst of a tough battle was staying calm and focused.

“We've been in a couple battles like that before, and we just don't freak out. We don't panic,” Anderson said. “What happens will happen, so we were really relaxed, focused and still in game mode. We know we play for 21 outs, and that’s exactly what we did.”

Leading Southeast in the first game was freshman infielder Katie Dreiling and senior infielder Ashely Ellis who both had one hit. Right alongside them was Wallen who also had one hit.

The second game saw new hitting leaders as junior, senior, and freshman infielders Kaylee Anderson, Austine Pauley and Kynzie Wrigley all had two hits. Joining Rachel Anderson in the home run category was Ellis who also hit a home run in the win.

Ellis launched career home run number 49 over the center field wall in the bottom of the second to tie the game at one and make her the all-time home runs leader at Southeast.

Ellis gave the Redhawks the lead in the bottom of the sixth when she jumped the yard again, this time to right field to put Southeast on top for the last time.

She will get the chance to add to her record as Southeast takes on UT Martin in a two-game series on Tuesday, May 4, in Martin, Tennessee.

These three wins put the Redhawks at a 24-14 record overall and a 19-5 record in the Ohio Valley Conference.