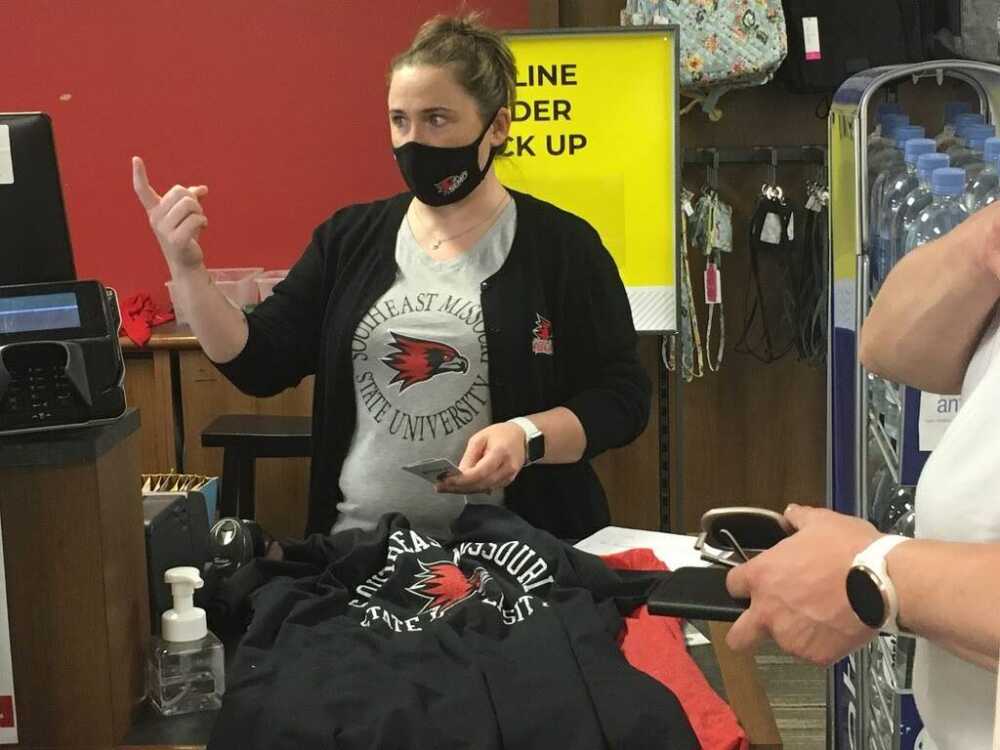 Tina Wright works at the bookstore at the University Center. Wright is a general education major, a student worker and a mother.
Photo by Josh Seabaugh

Wright said her first major was pre-nursing, but she changed her major during the 2019-2020 school year, wanting to experience all Southeast has to offer.

“The fact that I could dabble in different areas instead of just focusing on one specific major, that’s what I really like,” Wright said. “Right now, I’m minoring in interior design, and I’m also taking some criminal justice classes and some construction management classes.”

Wright said the experience and the freedom of taking multiple courses has helped her during her time at Southeast.

Majoring in general studies includes set requirements to obtain a Bachelor of General Studies degree. To earn the degree, students have to complete a minimum of 120 semester hours of credit, have a minimum GPA of 2.0 and complete specific general education courses. The gen ed courses include nine hours in humanities and fine arts, three hours in mathematics and seven hours in natural sciences.

Wright is a student worker on campus and can be found working at the bookstore at the University Center. During downtime while at the store, Wright said she gets caught up on schoolwork. This is thanks to both free time and the textbooks available at the bookstore.

“It’s actually really nice,” Wright said. “I work at the bookstore, so a lot of times, I’ll be able to bring my laptop in, and I can work on homework when it’s been really slow. I can also have access to the different books I need. Like, say I forget a textbook, I can go to the back and get what I need.”

While completing school and going for her degree, Wright is also a mother. With a daughter who is 17 years old at home, Wright has been able to balance school and home life while helping her child with her own homework.

“I’ve been going to SEMO since 2015,” Wright said. “So when I first started coming here, she was about 12 or 13. She’ll still come to me with help for her homework, and I’ll be doing my homework.”

With just more than 9,000 students attending Southeast as of the 2021 Spring semester, less than 3% are declared as general education majors. Given how much experience comes with it, Wright said she encourages Southeast to promote the general education major. According to Dr. Doug Koch, the Vice Provost of the Gen Ed department, the flexibility of the courses can lead students into a variety of careers. They may also go into graduate school after completing their degree. Wright would like to go into construction or airplane interior design.

Academic advisors are available for Southeast students who are questioning their major or considering general education. Advisors can be found at Academic Hall, or students can set up advising appointments via email.