Tuition is reaching new heights, but why? 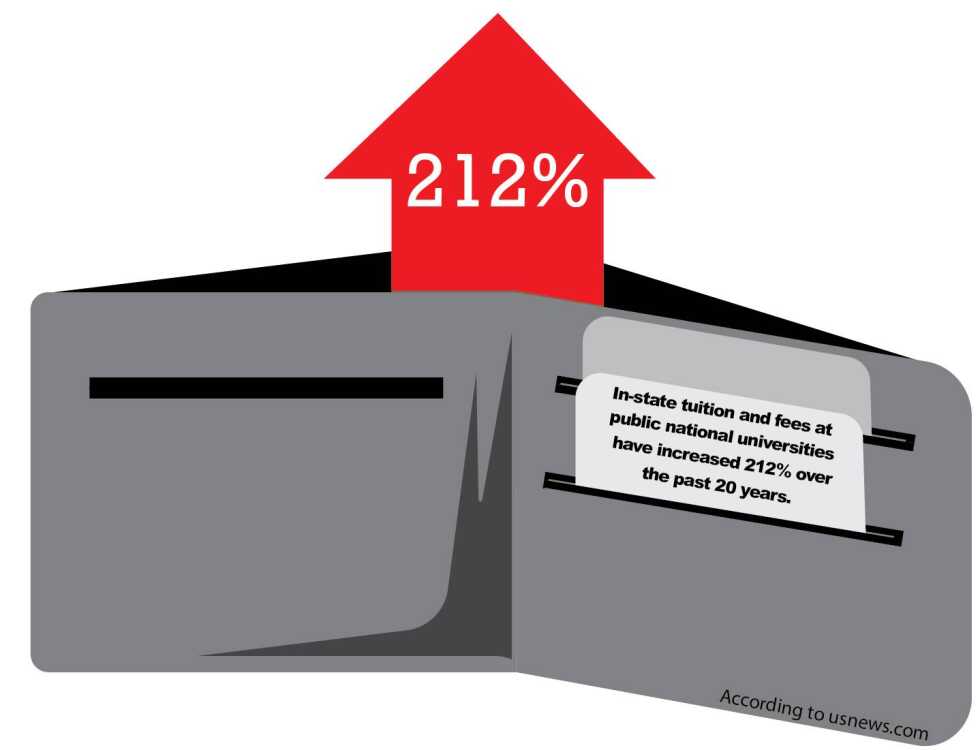 Salaries, insurance, scholarships, utilities, maintenance and repair are all things that make up a college student’s tuition expenses. With the rise of mixed courses, hyflex and online courses, Budget Office director Sue Wilde said students could see an increase in next year's tuition in an effort to merge online course fees.

This change on tuition statements would come from a proposal made April 19 at the Student Government Association (SGA) meeting at which Vice President for Finance and Administration Brad Sheriff proposed specific increases to tuition to merge fees for online courses. These proposed increases would raise a full-time student’s tuition to $187.50 more per semester.

SEMO sophomore Deanna Moss attended her first year of college at Cape College Center and came to Southeast as a sophomore. She said the rise in tuition wasn’t necessarily surprising.

“So, the first year was definitely a lot cheaper than my second year at college,” Moss said.

In the eyes of Southeast alum Alissa Blechle-Quaite, the cost of tuition has changed throughout the years. Blechle-Quaite attended Southeast the first time from 1998 to 2005, returning in 2017 to get a master’s degree in K-12 school counseling.

Blechle-Quaite said while she didn’t remember the exact numbers, she knows throughout the years she spent earning her master’s degree and then seeing her nephew go through college, she can note a considerably higher price than when she was an undergrad in 1998.

“It was shocking how much more it was — I know it was my master’s in comparison to undergrad, but it was a considerable difference,” she said.

She said while tuition has gone up a lot throughout the past years, the first time she was at Southeast, not as many programs were offered as they are now. Wilde said while programs may bring up the price of tuition, that's not necessarily a driving factor in the rise in tuition.

“We have utilities cost, insurance cost, property insurance — we have all of these things that go to supporting us as a business, as well as an institution of higher education,” Wilde said. “There's just a lot of things that go into it, and we really have worked to keep tuition as low as we can, by making significant cuts over the last couple of years.”

Wilde said the primary sources of income for the university are tuition and state appropriations. The state also has a certain amount of money that they approve to adjust tuition by; for example, they have $11.08 extra per credit hour approved but don’t actually increase the amount by that much.

Professor of economics William Weber said one of the largest contributing factors to rising tuition rates is the lack of government funding. He said under the government, education is classified as discretionary funding.

According to the Cambridge Dictionary, discretionary funding is an amount of money available to spend on things that may be useful although they are not considered necessary.

He said one of the things that, especially during the pandemic, gets cut is government funding. The cuts then lead to students paying more tuition themselves.

According to data from Southeast’s Budget Office, Southeast’s state appropriations in 2021 rose back up to almost $41 million. This is opposed to 2020, when it dipped below $39 million.

According to senate.gov, appropriations are defined as, “The provision of funds, through an annual appropriations act or a permanent law, for federal agencies to make payments out of the Treasury for specified purposes. The formal federal spending process consists of two sequential steps: authorization and then appropriation.”

Weber said inflation doesn’t have a significant effect on tuition.

“Inflation rates are very low right now; for the past 10 years, they've been around 2% or even a little bit lower than 2%,” Weber said. “Surely, inflation has some effect on universities — they have to pay higher wages to attract workers, professors and staff to come if wages are rising in the rest of the economy.”

While Weber said inflation doesn’t have a large effect on tuition, it may still play a small role.

Weber said living in Southeast Missouri might also have an effect on the cost of tuition.

“This tends to be a region that is historically relatively poor compared to other parts of the state, and fewer people have attended college in this part of the state,” Weber said. “I don't think university leaders want to raise tuition on a relatively poor clientele, and so they're having to find ways to raise revenue or cut costs.”

To learn more about the budget and what’s going into Southeast’s tuition, visit the website.