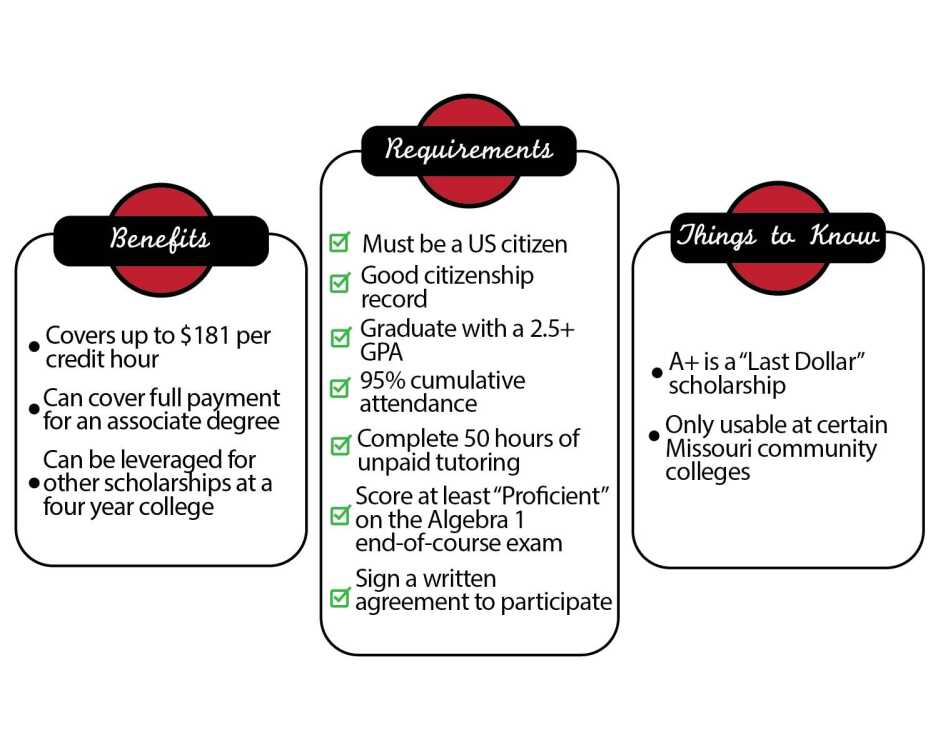 A student attending high school in Missouri has probably heard of the A+ Scholarship Program at one point or another. Participating in A+ and completing the program is an easy way to secure funding for two years’ tuition at 66 Missouri public community colleges.

The A+ requirements are straightforward — the student must be a US citizen and have a record of good citizenship, sign a written agreement to participate, graduate with a 2.5 or above GPA, have 95% cumulative attendance, perform 50 hours of unpaid tutoring or mentoring, and score at least “proficient” on the Algebra 1 end-of-course exam.

Katy Andersson, A+ coordinator at Cape Central High School, said the toughest requirement for students to meet is the GPA, but her job is to monitor students who signed up for the program and to help them stay eligible.

“If they sign up, I’m going to monitor from freshman year until graduation,” she said.

Andersson said she is currently monitoring 118 students who are close to completing the program, and of those 118, 47 have fully met the A+ requirements. She said last year’s graduating class had 74 eligible students out of the 271 graduates.

According to the Missouri Department of Higher Education and Workforce Development, if a student took full advantage of the A+ Scholarship, they could receive $181 per credit hour in financial assistance. For a student taking 12 credit hours, the minimum for a full-time student, their scholarship would be valued at $2,172 per semester.

Carlee Maune, Southeast junior, used her A+ eligibility at East Central College in Union, Mo., to earn her associate’s degree. She said the money covered her tuition while she decided on what to major in at Southeast.

“I’m so grateful for the A+ program because it stopped me from blowing money on classes I didn’t need,” Maune said.

So, if the requirements are feasible for good students, and the money can pay for four semesters of tuition at a two-year college, why don’t more students take advantage of the program?

The A+ Scholarship is what Tinea Ortega, coordinator of academic programs at Cape College Center, calls a “Last Dollar Scholarship,” meaning it is applied as the very last scholarship, only covering tuition that isn’t paid by state or federal financial aid. This can lead to situations where students may qualify but will never use any of the A+ money, as it isn’t needed or allowed.

A+ money isn’t flexible in its uses — it is usable for four years after high school graduation and only covers certain general education courses. Ortega said a strategy students can take is to use other scholarships to pay for books or other expenses and use money from the A+ program for tuition to maximize its potential.

Andersson said one reason students may forego attending community college to use their A+ scholarship money is because they want a traditional on-campus college experience and can’t live on a community college campus.

“I had a senior last year who was on the fence [about whether to use his A+ scholarship money at a community college or attend a four-year university]. He was going to live at home, but he wanted a social life,” Andersson said. “He didn’t want to keep hanging around his high school friends. He felt like he’d miss out.”

The student ended up foregoing using his A+ scholarship money in order to attend Southeast and live on campus.

Another reason more students don’t use financial assistance from the A+ program to attend a community college could be students can leverage A+ eligibility for scholarships at four-year universities. Southeast currently has two scholarships that are eligible for A+-certified freshmen. The first is the Residence Life Leadership Award. The scholarship is $1,000 a semester for students meeting the requirements.

The second is the Southeast A+ Scholarship. This scholarship is closely related to what the A+ program offers, but since Southeast is not A+ eligible, it is university-funded and only available at the Kennett and Sikeston campuses. The scholarship works the exact same as the Missouri A+ scholarship, meaning it is a Last Dollar Scholarship and covers an associate’s degree.

In 2005, Southeast entered into a dispute with then partner Three Rivers Community College. At that time, the two colleges had a partnership where each was able to teach classes at the Sikeston, Kennett and Malden campuses — meaning SEMO students at those campuses had A+ eligibility.

In February of that year, Southeast announced it would begin teaching all classes at those campuses, causing Three Rivers to file a lawsuit. In 2008 the lawsuit was dropped, but the two schools were no longer partners at the regional campuses, and Southeast was no longer A+ eligible. The rift left students attending the regional campuses without a

Dan Presson, director of career services, Kimberly Erskine, manager of workforce development at Ameren, and Jenn Morris, HR director at Cigna/Express-Scripts, all said attending community college and earning an associate’s degree can be an asset for a resume.

“From Ameren’s perspective, we’re all for how people get their education, as long as they get it,” Erskine said. “It’s more about having the degree than where it’s from.”

In December, Missouri Governor Mike Parson announced $10 million in extra funding is going toward the A+ program. He said the funding is partly from federal COVID-19 relief funds and partly from his recommended budget.

The program isn’t going anywhere soon, and neither are the opportunities it offers. For more information on the state A+ program, visit dhewd.mo.gov/ppc/grants/aplusscholarship.php.