Column: A look back at the 2019 OVC Champions 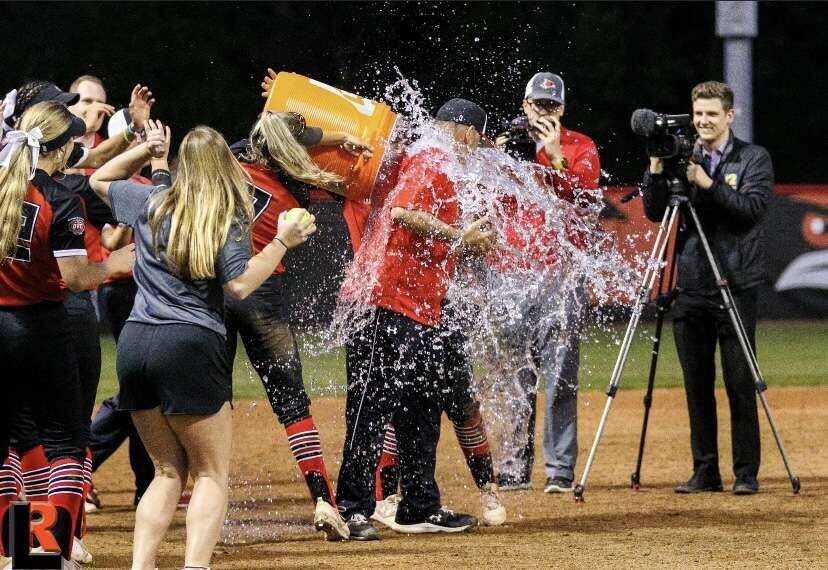 The Redhawks celebrate after their win over Jacksonville State in the 2019 Ohio Valley Conference Tournament Championship. Team 43 went 46-18 en route to their championship win.
Photo submitted by Rachel Donald

As the Ohio Valley Conference tournament approaches for the 2021 Southeast softball team, the 2019 OVC championship team looks back on their season in hopes to help inspire Team 45.

Southeast alum Parker Bandy said the program would not be what it is today without Redburnĺs efforts.

ôThe biggest thing that set us apart from all the other teams was our leader. It was Redburn,ö Bandy said.

Sarah Messex, Team 43ĺs shortstop and Southeast alum, said what separates him from others is ôheĺs not our coach first.ö

ôWhat he understands is that coaching goes a lot farther than what happens on the field and what your stats are. For us to be a good team, we have to want to be a good player, and that starts with having a good coach that we can trust,ö Messex said. ôYouĺre not just another number on the field Ś you are a person to him. He truly cares about you and wants to see you succeed not only on the field but in life.ö

Former Southeast softball player and one of Team 43ĺs catcherĺs, Rachael Donald, said Redburn always cared about the little things, and that is what helped them get to winning a championship.

ôThat is a huge thing I will always carry with me for the rest of my life that he was big on, and it made a huge difference in the way we played, the way we acted, the little things on and off the field,ö Donald said. ôNo matter how small it is, you do things the right way. It really shows when youĺre on the big stage, the little things will come through, and either you do them, or you donĺt. He installed that in us, and we did do the little things, and it showed that year.ö

The unity the 2019 championship team had not only was beneficial off the field but on it, as well. Donald described Team 43 as ôeffortless.ö

After losing to Jacksonville State University (JSU) on the first day of the tournament, former softball player and pitcher Haley Thogmartin knew her team was going to get to the championship game.

ôMe and Haley went behind the dugout to just take a minute after the first loss to JState, and I remember looking at her and saying, ĹWe have a long road ahead,ĺ and she grabbed my hand and said we have a long road to the championship, and we are going to make it there,ö Messex said.

On championship day, the Redhawks had to defeat the reigning three-time OVC champions, JSU, twice. That's exactly what they did.

ôWhen our backs are against the wall, we knew every single person on that field and in the dugout were going to be there for us on and off the field. We knew we could count on people outside of softball. We knew we could count on the coaches outside of softball. It was never forced,ö Bandy said. ôWinning the season the way we did, there is no other way it could have happened. It was written in a book before we even knew it.ö

When asked what Team 43 means to them, Bandy, Donald and Messex had nothing but heartwarming answers. For Bandy, it meant inclusiveness. For Donald, it meant lifelong lessons. She said Team 43 is something that will stick with her for the rest of her life. Messex said when she thinks of her favorite team, she thinks of the 2019 championship team.

As of May 5, the 2021 Southeast softball team is currently in first place in the conference. The OVC tournament is set in Oxford, Ala., for May 13-15.