“We have the Ceramics Club here, we have the Horticulture Club and we also have screenprinting from the Art Design Department here to sell some stuff,” said Randyn Heisserer-Miller, acquisitions manager of Kent Library.

Heisserer-Miller said the library attempted to host the event last year, but it was cancelled because of COVID-19. 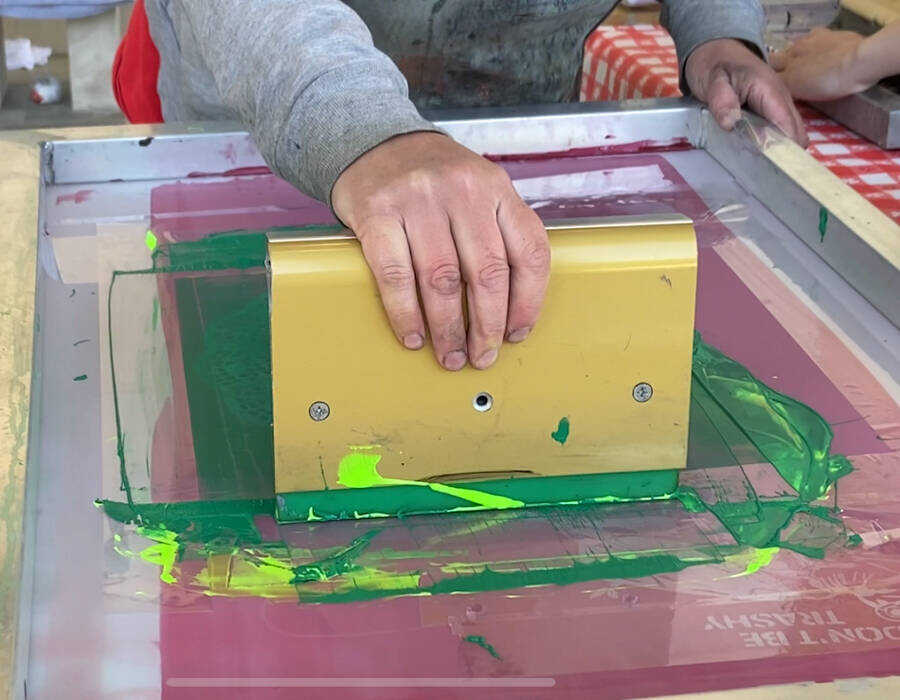 He said the purpose of the event was to educate students on sustainability and topics which have recently become more of a concern to the public.

“Climate change and the environment is on everyone's mind, and I think we are just trying to raise awareness of Earth Day in general and protecting the environment,” Heisserer-Miller said.

One of the activities offered to students at the event was T-shirt screenprinting, using thrifted shirts and non-toxic paint to create new designs.

“This is mostly non-toxic — the ink is non-toxic,” Sanders said. “The photo-sensitive emulsion we use does have some toxicity to it, but it's not something that's a very large part of the process.”

“A lot of time, people donate them, but what's going to happen to them once they get donated? So we are printing over old designs with new designs so people can print themselves and make special shirts out of it and hopefully reuse,” Sanders said.

Sanders said she reuses old material and replaces toxic chemicals with non-toxic ones, to make it safer for the environment and those who live in it.

She said she uses recycled fabric in her class’s artwork. Even the pieces of a shirt, from large to small strips, are put into artwork, and tiny scraps will get used for rags to conserve paper towels.

She said she believes it's important to understand different bodies in different places, Sanders said even for her, who worked in an art environment while pregnant.

Sanders said for women, who experience the most changes within their body such as pregnancy, being exposed to harsh chemicals can be damaging. Sanders believes it’s important to address workplace safety for different kinds of bodies.

Olivia Standerfer, sophomore who attended the event, said she believes society has normalized what is easier and most convenient, which oftentimes leads to overuse.

“I feel like that is something people don't think a lot about, but rather whatever is cheap and convenient,” Standerfer said.

Heisserer-Miller said he hopes to see more events like these in the future, to create safer learning environments for students.

“We want to help tell you how you can help with sustainability, which is being aware of your impact on the environment and what you can do to try and educate yourself on that impact,” Heisserer-Miller said.