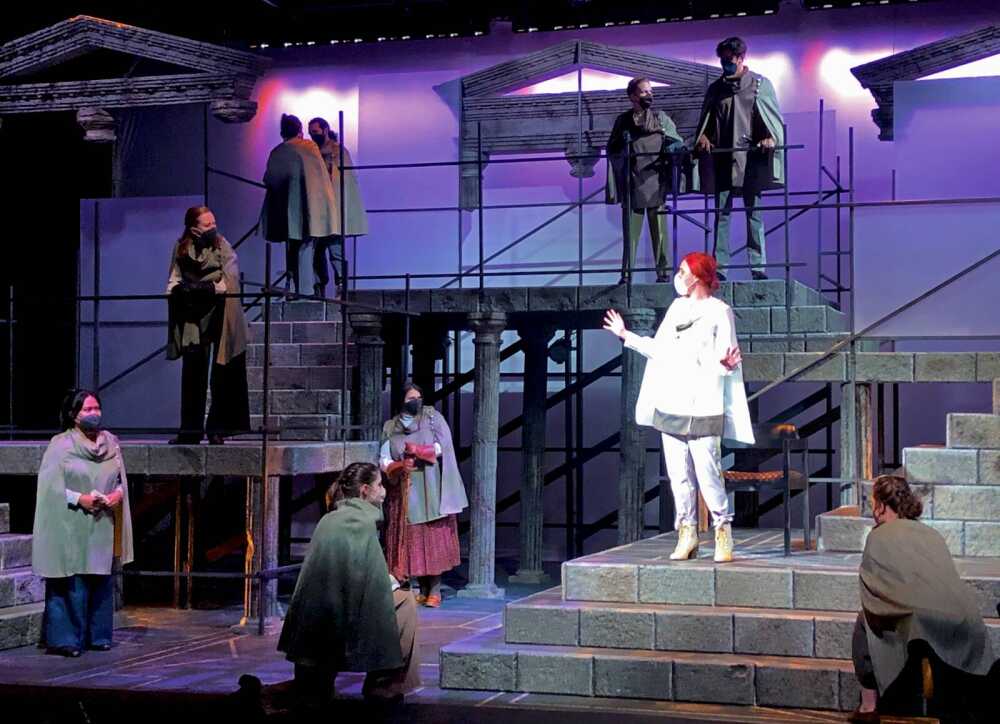 The conspirators gather around Julius Caesar (center) before Caesar’s murder on the Ides of March in the Southeast River Campus production of Shakespeare’s “Julius Caesar” on April 22.
Photo by Olivia Tock

William Shakespeare’s “Julius Caesar'' is a timeless classic, filled with prominent themes such as gender and power. Prior to the restoration of the monarchy in Britain, women were forbidden from performing in theater, and young boys played the female roles. Fast-forward 361 years later, and the cast of “Julius Caesar,” performed in the Rust Flexible Theatre at Southeast River Campus on April 22, is more liberated, with modern twists on the themes of gender and power.

River Campus students performed “Julius Caesar” with contemporary aspects like guns, cell phones and androgynous roles. According to associate professor of theater Bart Williams, these stylistic choices preserve the timelessness of Shakespeare’s work. It also provides a relatable and easy way to follow the play for audiences who are unfamiliar with Shakespeare.

“It’s really trying to get at the core of what Shakespeare was really going for, because when it was originally done, it was in an Elizabethan time — so they had Elizabethan outfits, and they put Roman stuff over it,” Williams said. “So, it was never done in what we would think of as a Roman period of time — it always had a reflection of what was contemporary.”

Williams said they chose to reflect these styles of Shakespeare’s original works. The directors, set designers and actors went back to the source material. They then performed the piece in their own modern way, putting modern touches to it to clearly tell the story. One example is the use of andrgogynous pronouns like they/them and we/us in this interpretation.

“Shakespeare played with gender a lot,” Williams said. “Really, what it was is finding out what the character’s energy was and how the character spoke, and then in auditions, finding the best match for each character. So, there's no politics, there's no agenda behind [using androgynous pronouns]. I work with the people I have, which is what Shakespeare did. … I'm looking how to be true to that.”

The title role, Julius Caesar, is traditionally performed by a male. But in the Southeast interpretation, bachelor of fine arts student Carole Ann Miller took the laurel crown and portrayed Caesar.

“I like that it's a different take on Caesar. I think that the way Bart and I talked about it and the way I ended up playing it was different than anything you’re going to see anywhere else,” Miller said. “We wanted it to be andrgogynous, we wanted there to sort of be a question.”

Miller said she did research on the character and discovered Caesar and his whole family believed they were descended from gods. As a result, Williams and Miller decided to use they/them pronouns as a way to convey Caesar’s superiority to mankind. Miller said Caesar’s god complex could be attributed to his love of Rome, “because he really did genuinely love the people of Rome.”

The timelessness of Shakespeare’s work was not the only theme. Bachelor of fine arts student Sara Naumann who played Caska said this rendition is easy to follow and understand.

“I think if you are watching Shakespeare, at least for the first time, this is a pretty easy show to follow along and understand the story of and really get pulled in,” Naumann said. “There is something in it for most people.”

Both Miller and Naumann noted the importance of fusing ancient and contemporary times to relate the story to the audience.

“You have this mixture of ancient Rome and this modernity that you wouldn’t think is there, and I think that makes it this timeless story,” Miller said. “And it can happen anytime, anywhere.”

Naumann said the set of “Julius Caesar” helped achieve this, because on the stage, there were many columns, designed to look old and decayed, reflecting the architecture of ancient Rome. But what tied this time of old to modern times was the modern metal ropes holding up the structures. Naumann compared the set to the ideas being expressed.

“It's like these [ancient] ideas that need to be changed, that are obviously still there,” Naumann said.

Miller said the performance is stronger because it has both the past and future integrated into it.

Audience member Cindy Sause said this was an interesting interpretation, with the modern elements.

“I think it resonated. I think it helped make it a little more accessible maybe to younger folks,” she said.