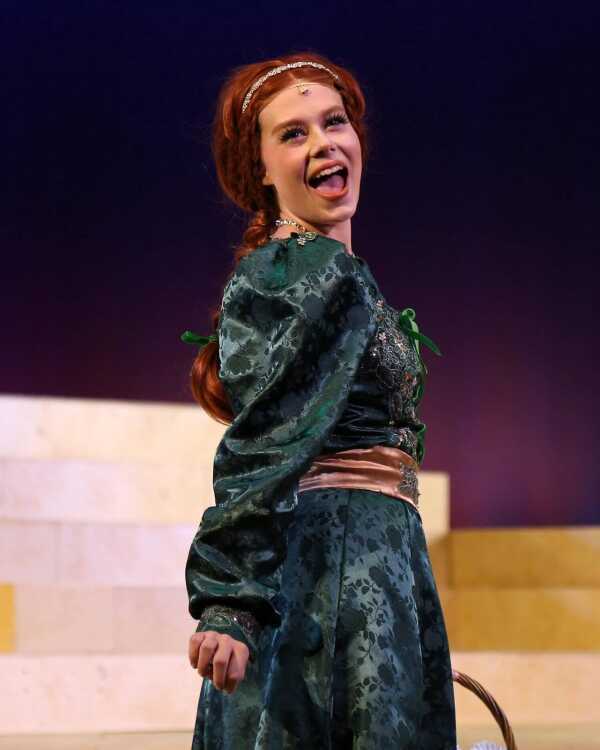 Josslyn Shaw plays the role of Princess Fiona in “Shrek the Musical” during her junior year at Southeast. “This photo was taken in the middle of Act II which was a tap number. It was one of the most challenging numbers to do because I had to do an entire tap number and immediately then belt out with no air in my lungs” Shaw said.
Photo submitted by Josslyn Shaw

Josslyn Shaw has lived many lives through her musical roles. From a baker’s wife to Mary Poppins to an ogre princess, her life onstage has been full of memorable moments and surprises.

Musical theater majors come to SEMO for one main reason: to learn how to become better professional actors or actresses in the field. After graduation, many students move to big cities such as New York, Los Angeles or Chicago. One of these students is senior musical theater major Josslyn Shaw.

For Shaw, acting is not a hobby; it is a lifestyle. From the age of eight doing community performing to her first show at 13 years old, she has been living the life of an actress.

“This is really cliche, but I really couldn't imagine myself doing anything else,” Shaw said. “I've always kind of felt that this is what I am meant to be doing, and this is really the only thing I could see myself doing for the rest of my life and enjoying it.”

Shaw said she realized she wanted to go into musical theater during a dress rehearsal of “Mary Poppins.”

“My high school theater teacher Kim Mandrell turned to my mother and told her, ‘You know, she could do this for real. This isn't just something fun that she could do.’ Once my mom told me this, I told her, ‘Okay, then, I want to do it,’” Shaw said.

While at Southeast, Shaw has been in many plays and has had her fair share of key roles, such as Fiona in “Shrek the Musical.”

“I have always associated her with the main character of ‘New Girl,' Jess. If I had to give her a musical role, it would be Fiona from ‘Shrek.’ Honestly, that was the perfect role for her,” Wissler said.

Shaw said she felt she resonated with this role.

“Fiona is just a mix. She’s feisty, kooky and always down to get what she wants. She also always has optimism inside of her,” she said.

Shaw said like Princess Fiona, she always keeps her optimism in her back pocket. At points, she has been told it is almost childlike and that her dreams are a one-in-a-million shot.

“It's kind of like the Hannah Montana song ‘One in a Million,’” Shaw said.

“Most of our job is auditioning. That is what we’re doing most of the time,” Shaw said.

“She has the capacity to really knock you over with her singing and acting. But the thing that I appreciate the most is that she is surprising. She always comes at you with a little bit from left field. That makes her performances surprising, moving and funny,” Lavoie said.

Shaw, looking to the future, said she is excited about the food in New York and also the feeling of being her own main character.

“I enjoy the fact that I can walk down the street and not look at anyone. It's just nice being in a crowded place, but at the same time feeling like I'm the star of my own movie. I’m the main character,” she said.

Another character Shaw said she resonates with is Millie from “Thoroughly Modern Millie.”

“I played Millie in ‘Thoroughly Modern Millie' back in high school. When I wrapped that show up, I felt that I wasn't done with that character,” Shaw said. “I really resonate with the character. She is from a small town and moves to the big city, New York.”

“Thoroughly Modern Millie” is coming up on its 25th anniversary on Broadway. Shaw hopes for a revival so she can be in it.

Shaw would love to star in “Mean Girls the Musical” or “Sunday in the Park with George.”

“Mean Girls the Musical” was the production Shaw hoped to be her first Broadway debut. It was closed last year due to the pandemic.

Lavioe said Shaw is a very hard worker and an incredibly talented actor and singer.

“Shaw is a leader within the role, which is important for someone who is in the lead for shows as she has been and I suspect she will be in the future,” Lavioe said.

Shaw said she has advice she would like to pass along to fellow students when deciding to go to NYC or any big city to pursue their dreams.

“Have three months rent saved up because then you should have time to find a cushion to find a job,” she said.