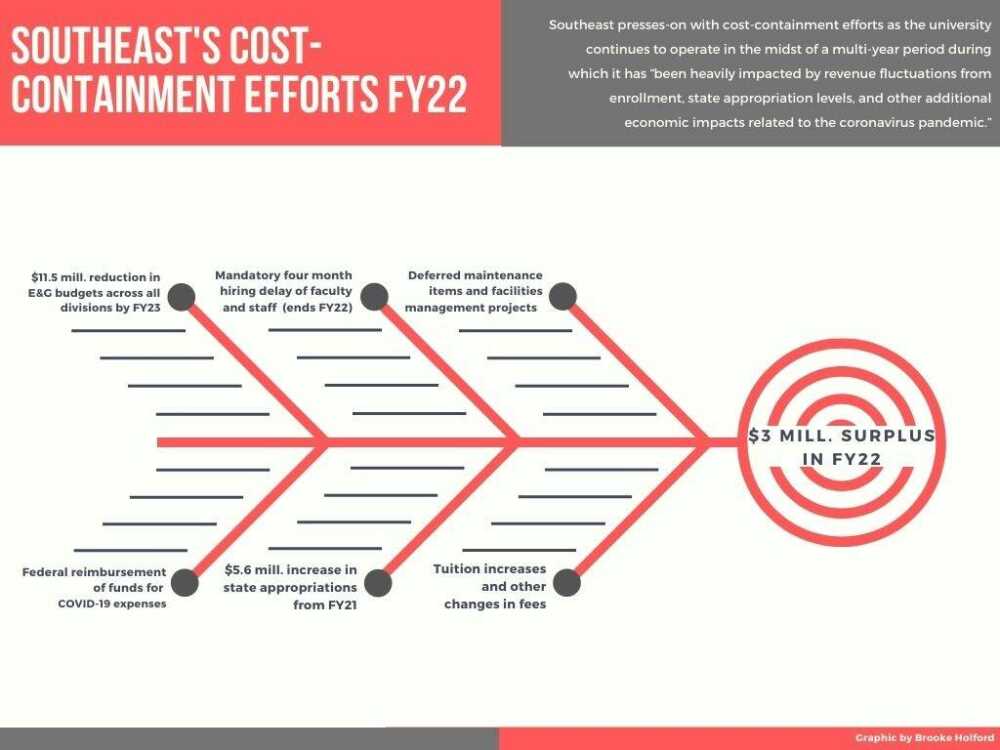 Sheriff said Southeast is in the midst of a multi-year period during which it has “been heavily impacted by revenue fluctuations from enrollment, state appropriation levels, and other additional economic impacts related to the coronavirus pandemic.”

“There are always going to be peaks and valleys in both revenues and expenditures, and [by taking a conservative approach], we’re really trying to smooth out those ups and downs,” Sheriff said.

The total budget for university expenditures and transfers for FY22 is $141,305,704, which is nearly the same as the FY21 budget, Sheriff said, while budgeted operating revenues increased to $144 million, 8.32% higher than the FY21 operating budget, according to materials from Southeast’s Board of Regents meeting on June 25.

According to the FY22 University Operating Budget, the year-end projection shows the university at a $3 million surplus.

“Our expenditure budget from Fiscal Year ‘21 to Fiscal Year ‘22 is flat, so the cost-containment efforts are working, and we’ll continue to push forward with those over the next couple of years,” Sheriff said.

The E&G budget “supports academic instruction and general operations,” with funds primarily coming from state appropriations and tuition, according to materials from Southeast’s June 25 Board of Regents meeting.

Designated funds include revenues for specific purposes, such as student general fees, and those revenues assessed or collected for a specific service or activity, such as the university School for Young Children and Southeast’s autism centers.

Auxiliary funds operate as “profit centers” that must generate enough revenue to account for their expenses, such as Residence Life, Textbook Rental and Student Recreation Services, according to materials from Southeast’s Board of Regents meeting June 25.

As a part of their “precautionary approach,” Sheriff said the university is utilizing a three-year budget plan consisting of a 12.5 percent reduction from FY20 budget levels in its E&G budgets across all divisions, in addition to other cost-containment efforts.

Of the $5 million to be cut by the end of FY22, $4.7 million has already been identified, Sheriff said. With budget reductions of $3.1 million achieved in FY21, an additional $3.4 million of reductions remains to be found in FY23, which would bring the university to it’s 12.5 percent goal of $11.5 mill. in reductions.

“We are working hard to cut costs in ways that completely spare students feeling like those reductions are coming at the expense of their experience or the quality of their education,” Sheriff said.

How the budget plan came to be

In FY20, Sheriff said the university was facing a lot of “unknowns,” and it appeared to be in store for “difficult circumstances” in the coming years.

The “unknowns” leading to a majority of the fluctuations in the university’s Operating Budget in the past couple of years include state appropriations, enrollment trends and the COVID-19 pandemic.

Sheriff said the university knew they needed to respond quickly to get ahead of these issues, and thus, the three-year budget plan and “conservative approach” was created.

“We needed to be really prepared to respond to the worst that could happen because of COVID-19 and other changes that are affecting us and, frankly, almost every other institution in the country,” Sheriff said.

Last year at this time, Gov. Mike Parson indicated there would be substantial additional withholdings to operating appropriations for public higher education institutions to bring the state’s FY21 budget in line with projected revenues, according to the Board of Regents meeting materials from June 25.

As a result, the university planned for a 20% reduction in state appropriations in FY21. However, as withholdings were released over the year, Southeast ended up with $5.6 million more in its base operating budget moving into FY22.

With $3.4 million of reductions remaining to be found in FY22 as part of the budget plan, Sheriff said the $3 million surplus could easily turn into a $2 million deficit if not handled with precaution, or if cost-containment measures come to a halt.

Sheriff said the unpredictable nature of the coronavirus pandemic was a large factor in creating the budget plan, but it was the combination that fueled the university’s decision.

“We were looking at COVID, but also a lot of things unrelated to COVID, such as the demographic shifts that are happening right now across the country, making it more and more difficult to maintain enrollment trends, and, obviously, tuition is a major source of revenue for us,” Sheriff said.

Southeast is budgeting for a projected enrollment decline of 250 full-time equivalent (FTE) students.

The FY22 budget incorporates tuition and fee actions taken by the Board at the May 15 meeting, according to materials from Southeast’s Board of Regents meeting June 25.

Southeast’s Board of Regents raised tuition 8.5% and eliminated four fees for the 2021-22 academic year at the May 14 meeting.

Despite lower enrollment projections, the university anticipates gross tuition revenue growth of $4.1 million, as stated in the June 25 Board of Regents meeting materials. Most of the increase — $1.2 million — can be seen in scholarship funds, which fall under the E&G budget, in order to bring this budget into “closer alignment with actual costs.”

According to the Board of Regents meeting materials from June 25, the increase is attributable to tuition rate increases, which will be partially offset by the elimination of web, webinar, ITV and off-campus fees as approved at the May board meeting.

Part of the increase in tuition is due to the elimination of web, webinar, ITV and off-campus fees. These fees account for a $6.25 raise in tuition as all four fees have now been combined with tuition rates.

Although tuition did see an increase, Sheriff said students actually benefit from the decision to roll these fees in with tuition rates.

The change reduces the average cost in fees for students, and also caps that cost at $187.50 as the maximum a full-time undergraduate student enrolled in 30 credit hours would have to pay in future semesters.

“What we found by looking back over the past few years is that the number of our students paying at least one of those fees and the average amount they were paying was climbing pretty dramatically,” Sheriff said.

Sheriff said no one enjoys cost-cutting measures or increases in fees, and those are not decisions his department takes lightly.

“Everything we do, we do it very thoughtfully and very carefully, and in ways that we hope advantage our students as much as possible, and, frankly, help us maintain the level of resource we need to really provide a high-quality education and student experience,” Sheriff said.