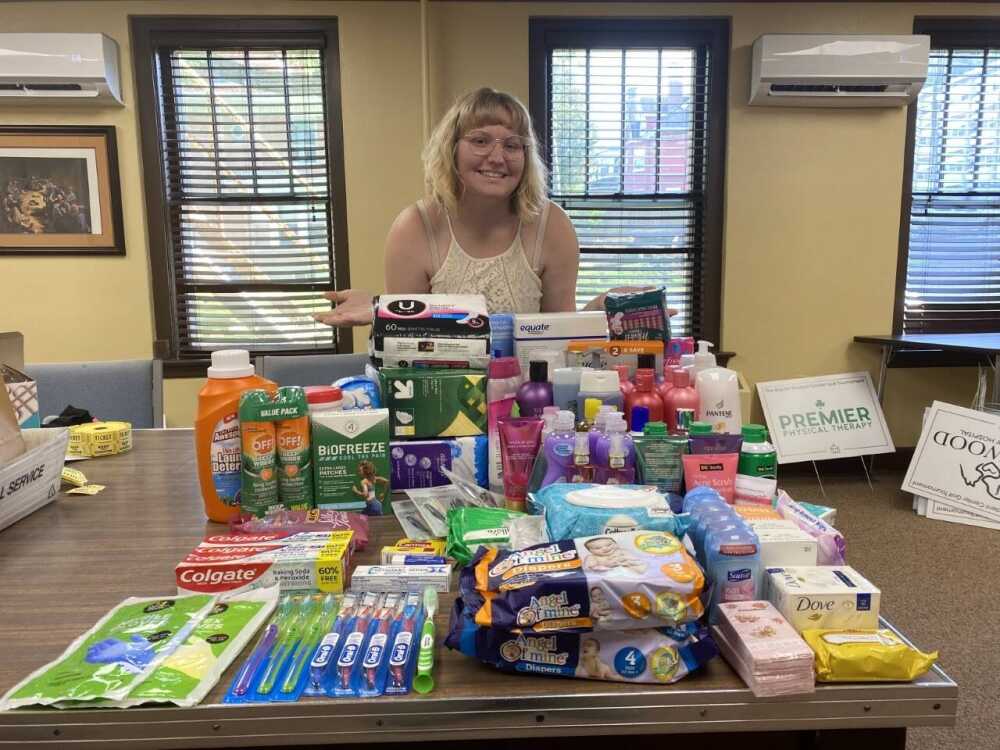 Southeast student Breah Rennie, member of Planned Parenthood Action SEMO, poses with hygiene products the group collected to donate to Safe House for Women in Cape Girardeau on May 6. The group collected 650 pads and tampons, 37 bottles of shampoo, conditioner and lotion, and more across Southeast’s campus during the month of April.
Photo submitted by Breah Rennie

After some time away, a student club returns to Southeast’s campus loud-and-proud to raise awareness on reproductive freedom and safe sex practices.

Planned Parenthood Action SEMO became active on campus again in the spring 2021 semester after falling apart several years ago due to “lack of interest,” but Southeast sophomore Sydney Haynes, club president, said that hasn’t been an issue this time around.

According to the group’s mission statement, “Planned Parenthood Action SEMO is established for the expressed purpose of promoting education and awareness around reproductive freedom, including, but not limited to, access to contraception, comprehensive birth control, accessible abortion care, sexually transmitted infection (STI) testing and treatment, hormone replacement therapy (HRT), as well as other services provided at Planned Parenthood health centers.”

In its first semester back, the group brought in almost 50 members, and Haynes said she’s confident this trend will continue as the group becomes more active on campus.

Southeast junior Breah Rennie led efforts to start the club back up again with the main goal of ‘educating students about resources and services available to them at Planned Parenthood centers.’

Haynes said the group also works to normalize open discussions about sex through a variety of events.

“Most people like sex — there’s nothing to be embarrassed about — but we have to be safe and be able to talk about it,” Haynes said. “There’s not many places that offer education from various experts on such a wide range of reproductive topics or provide such a variety in services [like Planned Parenthood.]”

Planned Parenthood Action SEMO set up donation boxes around campus to collect hygiene products for the Safe House for Women in Cape Girardeau throughout the month of April for Sexual Assault Awareness Month.

By the end of the month, Haynes said the group collected 650 pads and tampons, 37 bottles of shampoo, conditioner and lotion, and many more hygiene products for the Safe House for Women.

Haynes said the group’s success so far has opened her mind to the kinds of events they could host in the coming semesters, such as safe sex drives and awareness events, information booths, petition signings and more, as well as potential partnerships with Redhawk Health Educators, Redhawks Rising and other campus organizations.

The group also plans to partner with Planned Parenthood in Cape Girardeau and other local businesses to collaborate on future events, Haynes said.

Sarah Kuborn, assistant professor family studies and advisor of Redhawk Health Educators, said she thinks the group is “definitely needed” on campus because the traditional college student age-group sees more opportunities for sexual encounters and gains independence upon moving out of their family home and into the dorms, as well as hook-up culture on college campuses.

“To have some sort of advocacy like the group on campus, I think, is only going to promote and voice that [Planned Parenthood] is wanted and needed,” Kuborn said. “One of the things I love about students on-campus is their ability and opportunity to have their voice heard, and I think it makes a big difference because people in the community may also want this, but they don’t have the platform to be talking about it or they don’t feel they do, and when students do, it gets noticed.”

As the group grows larger and starts to come together even more, Haynes said she and other members of Planned Parenthood Action SEMO have noticed an added bonus to advocating for a worldwide organization on Southeast’s campus.

“It feels like you’re really making a difference,” she said.

Listen to "Inside Planned Parenthood Action SEMO" on Spreaker.