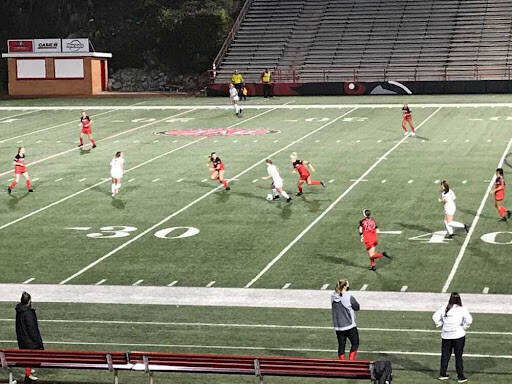 The Redhawks get back to defend during their 3-3 tie with the SIUE Cougars on March 23, 2021 at Houck Field in Cape Girardeau.
Photo by Ryan Duvall

It was a night of firsts for the Redhawks Women’s Soccer team as two sophomore transfers and a freshman scored their first goals for Southeast, combining for the four goals that took SEMO to the 4-1 victory over the Maryville University Saints.

Sophomore midfielder/forward Anna-Clara Couturier put the first two goals on the board, one off a corner kick assist from freshman defender Emma Tucker and the other off a cross from senior forward Lauren Welker, leading to the assist by sophomore midfielder Zoey Memmel before the goal by Couturier.

“It was the first time I got on the field in the regular season, so I was really excited and focused,” Couturier said.

It was a scoreless first half that saw eight shots by the Redhawks, but five saves by the Saints junior goalkeeper Katie Nash kept SEMO off the board. The second half saw Southeast improve on putting away their shots with four goals on just six shots.

After Couturier’s first goal, Maryville struck back with a goal from senior midfielder/forward Amanda Kaltwasser, assisted by freshman midfielder Lily Boushelle. Couturier went on to score the winning goal later in the match as the Redhawks never looked back, scoring twice more to put the Saints away.

“I wasn’t really expecting it, it just kind of fell through,” Memmel said. “It was my first real collegiate goal, and I just couldn’t wait to celebrate with my teammates.”

SEMO is now 1-1 on the season following a loss at the University of Memphis on Aug. 19. Head Coach Heather Nelson said the team improved following the loss to Memphis and has been working on organization coming into Sunday's game.

“Part of playing a team like Memphis that has been a sweet 16 program is that it exposes some of your weaknesses,” Nelson said. “That helped pay off for us tonight — you can always take a loss and make something good out of it.”

Southeast will be back in action Thursday, Aug. 26, when they take on the University of Missouri-St. Louis Tritons at 6 p.m. at home in Houck Stadium.