Defense gets the job done 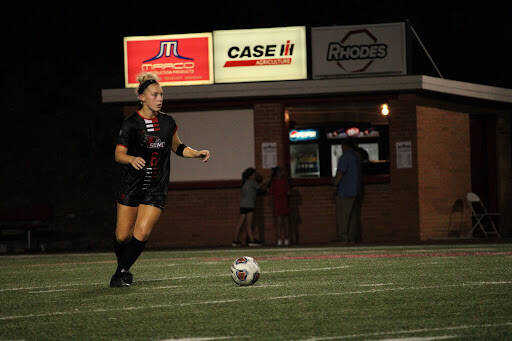 On a hot and humid night in Cape Girardeau, the Southeast Women’s soccer team used defense to take home the 1-0 victory against the University of Missouri-St. Louis Tritons.

Redhawks senior goalkeeper Bailey Redden saw little in the way of shots that required her to save them. The Tritons could not get through the defenders of the Redhawks which resulted in them taking only two shots, only one of which was a shot on goal.

SEMO sophomore midfielder/forward Emma Brune, who is playing the defender position due to injuries suffered by the team, said the team worked on their defense all week in practice.

“We’ve really been working on combining as a unit and I think that really showed tonight,” Brune said.

Southeast, on the other hand, had many opportunities to score on the other end, putting up a total of 13 shots, six of these were shots on goal. Many of these shots came from corner kicks, the Redhawks had a total of six corner kicks while holding the Tritons to just one.

The first and only goal came in the 15th minute when SEMO sophomore forward/midfielder Kiana Khedoo put one into the back of the net. It was Khedoo’s first goal of the year to put Southeast up 1-0, a lead that they did not give up.

Khedoo said she was excited to get the team the win but she could not have done it without her teammates.

“Honestly, I was just thinking we had to put one on the board before halftime and that we needed to get the win,” Khedoo said.

The Tritons had an opportunity to tie in the 90th minute when senior forward/midfielder Jalyn Richardson took their only shot on goal but the ball went above the net and out of play.

Redhawks head coach Heather Nelson said she was pleased with how well the defense played especially with some of the defenders injured.

“We’re waiting on some of the more experienced players to come back into our lineup,” Nelson said. “But it’s good that we’re having younger players step up into that role.”

SEMO will have several games on the road before they return to Cape Girardeau to take on the Missouri State University Bears on Sunday, Sept. 19 at 1 p.m. at Houck Field.