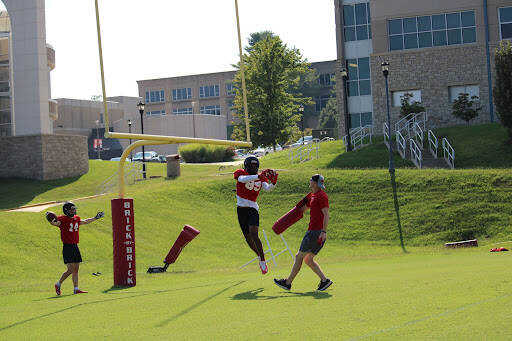 Senior wide receiver Aaron Alston makes a catch during a practice on Aug. 24 at Rosengarten Athletic Complex in Cape Girardeau. Alston is one of many returning members of the Redhawks offense in 2021.
Photo by Alyssa Lunsford

As week one draws closer, Southeast football has their sights set on being frontrunners in the Ohio Valley Conference (OVC) during the 2021 campaign.

Hess said the recognition means a lot, but he still has to come in and work like everyone else.

Hess is one of many key contributors returning to the Southeast offense in 2021.

The story of the offseason so far offensively for Southeast has been at the quarterback position.

Southeast head coach Tom Matukewicz said the coaching staff has been impressed with the consistency Ogbonna has shown during the offseason.

“[He’s been] the same CJ every practice, and he’s gotten better,” Matukewicz said. “[We] just love his preparation and his demeanor.”

Ogbonna transferred to Southeast from Hutchinson Community College, where he completed 57 of 92 passes for 736 yards and eight touchdowns. Ogbonna threw just three interceptions in six games for the Blue Dragons in 2021.

Matukewicz said the coaching staff has had talks with Ogbonna about the growing pains that could exist early in the season.

“It’s just like anything [else] — just let the game come to you,” Matukewicz said. “Fortunately, we have a lot of weapons, and so he doesn’t have to force things, just get the ball to our playmakers and let them go make plays.”

Southeast also features two running backs in Geno Hess and senior running back Zion Custis that have provided big scores for them the past two seasons.

Hess said having him and Custis constantly running the ball will eventually make opposing teams tired.

“We got the best two backs in the country, in my opinion,” Hess said. “I feel like it’s gonna be hard to answer.”

Matukewicz challenged Hess to improve his pass protection and receiving ability in the offseason.

“Fundamentally, he’s really improved, and I’m super proud of him,” Matukewicz said. “He’s got to be a complete back — we can’t take him out and put someone else in there when we’re throwing it, and so he’s really embraced it.”

While all the faces are new to Ogbonna, familiar faces are returning at wide receiver for Southeast in 2021.

Graduate student Zack Smith, Seniors Johnny King and Aaron Alston, and junior Rashaan Palmer all had major roles in the receiving game a season ago.

Smith led the way with 38 receptions for 403 yards and four touchdowns. King had 31 catches for 392 yards and two touchdowns.

As a team, the Redhawks averaged 27.6 points per game and scored 221 points across eight games.

Douglas was named preseason All-OVC following the 2020-21 campaign where he posted 26 tackles, with 14 of them solo tackles. He was able to be effective in pass coverage with a team-best five pass breakups last season. He also averaged 3.5 tackles for loss and blocked a kick for Southeast.

Matukewicz said he likes where the Redhawks are at as the season approaches.

“I like our team — they want to be coached, they want to be good, and we’re doing the things it takes,” Matukewicz said. “There might be a little bit more of a learning curve just because we’re breaking in a new quarterback and we got four new starters on defense. There might be some growing pains there, I’m not sure, but certainly once OVC play starts, I expect us to compete for a title.”

Senior defensive back Lawrence Johnson had a team high 55 tackles, 36 of them being solo. Johnson also had one interception and four pass breakups last season.

Matukewicz said a big focus going into the season is focusing on not beating themselves.

“We lost to SEMO quite a bit from just stupid penalties,” Matukewicz said. “Our motion was crazy and those types of things, so hopefully, we can just play smarter this year.”

Defensively, the Redhawks held opponents to 22.6 points per game.

Southeast will open up the 2021 season at home on Sept. 2 when the Southern Illinois Salukis come to Cape Girardeau for the fourth-annual War for the Wheel.

Hess said the Redhawks’ main focus heading into week one is “being the best SEMO we can be.”

After the week one clash with the Salukis, the Redhawks will travel to Huntsville, Texas, to take on the defending FCS National Champion Sam Houston Bearkats.

OVC play begins Sept. 25 when the Redhawks host the Tennessee State Tigers at Houck Field in Cape Girardeau at 2 p.m.