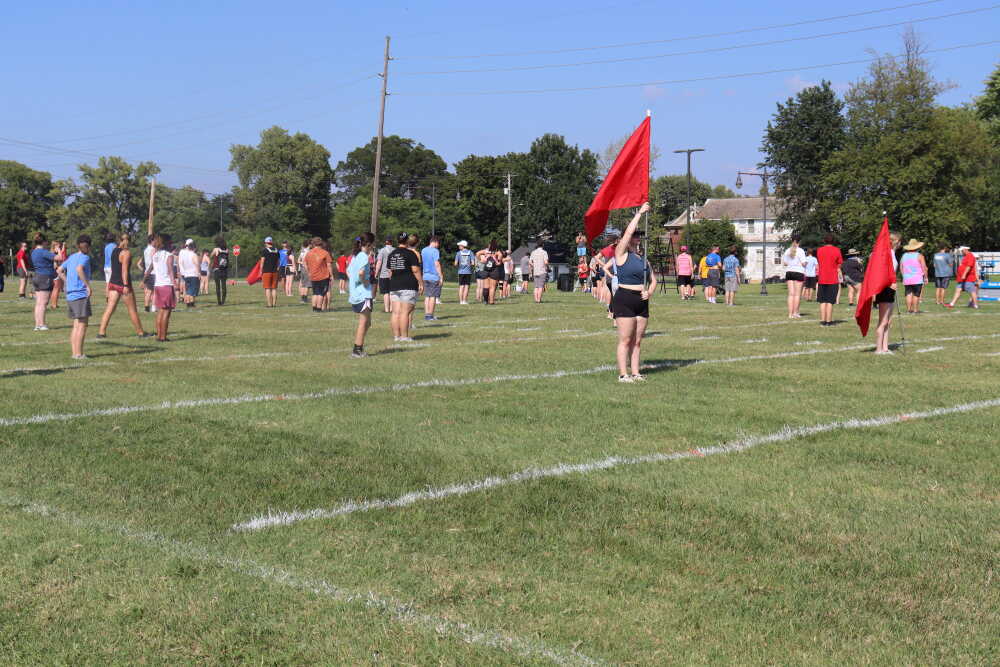 After their hiatus from live performances at games, Southeast’s marching band The Golden Eagles is back and bigger than ever. The enthusiasm runs high as the largest band SEMO has ever had enters into a new year with a new instructor.

Director of Bands Jim Daughters is starting his first year with SEMO’s marching band. Daughters said his favorite part of coming into this year has been meeting the students.

“Honestly, the students who are in the leadership of this organization are great,” Daughters said. “They have a good idea of what they want the band to be, their expectation level is high and their energy is great. It's been a really great start to the season.”

The number of members who will be on the field this season will range from 165 to 170, depending on the number of sundancers that are there at the time.

Assistant Director of Bands Nicholas Kenney said when they wanted to increase the number of performers, his goal was to have 144 members.

“We've surpassed that, which is good, and it's fun — I like to see the trajectory that we're going in. I like the excitement that is stirring up,” Kenney said. “The best is actually yet to come. We haven't seen where this is actually going to go yet, and I think it's just starting.”

The larger band can produce obstacles for students when it comes to preparation for the upcoming events, however.

Flute performance major Anthony Kandilaroff said one of the hardest parts about having a bigger band is getting everyone on the same page.

“Communicating — it’s been very difficult,” Kandilaroff said. “However, we have our own system that works, and we have a lot of leadership that knows what they're doing, and they're confident. It just helps a lot, and it's gonna bring everybody else together. We're gonna have so much fun.”

Along with having a larger band, the students aren’t restricted to limited performances like they were last year.

Due to COVID-19, the students in the band didn’t get as many opportunities to show off their skills as they do during a season not affected by the pandemic, since they were not able to perform at football games. This year, the students will show off their talents to a wider audience.

“I'm looking forward to being able to show people what we can do, because last year we got to show our families, but that was it,” senior trombonist Dalton Singer said. “We got one performance and then we were done, but now this year, we get however many home football games we have.”

The ability to perform, new director and larger band has brought an extra dose of excitement to the Golden Eagles. With all that excitement, many of the seniors want to create a legacy going forward.

“With Daughters being here, the game has changed a little bit, and with that being said, I want that legacy to move on and on and on, just keep going,” Kandilaroff said. “And I only have one more year left, so I'm trying to do that as best as I can.”

To see one of the largest marching bands perform at their first football game of the year, be at the War for the Wheel, when SEMO faces off against SIU Sept. 2.