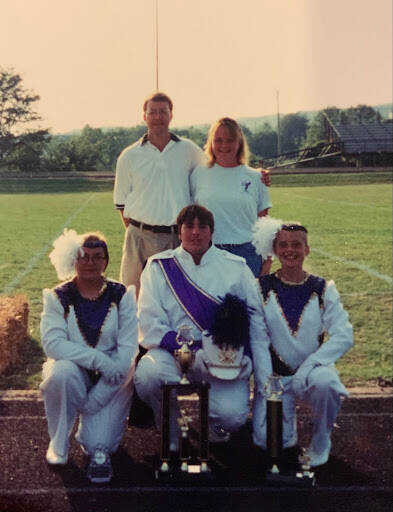 Between the years of 1983 and 1986 Jeff Singer played trombone in Southeast’s Golden Eagles Marching Band. 35 years later, his son Dalton is a Golden Eagle who also plays trombone.

Jeff Singer is now a retired educator of instrumental music who enjoys spending his time on the golf course. After his graduation from Southeast, Jeff spent 22 years as a music educator at Potosi High School and met his wife Keeli, who also attended Semo, after she took the job at the school as the color guard instructor.

“I remember contacting her because we had never had a color guard director. So, I talked to her and told her how glad I was that someone was going to do the color guard and be working with me,” Jeff said. “I didn’t know it, but she had already pretty much decided to not do it. I guess I talked to her enough that she said she would give it one more year. After a few months, I think the kids in the band saw a little bit of something, and they tried the best they could to get us together, and I guess it worked.”

Jeff and Keeli’s son Dalton is a senior at Southeast studying music education.He is in his second year as a trombonist in the marching band. He fondly remembers being around his dad and the Potosi High School Marching Band from a young age.

“Being around the band 24/7 as a kid was honestly pretty cool because I was around high schoolers when I was like four or five, so I always thought it was awesome. I thought I must be the coolest four-year-old out there,” Dalton said. “One year led after another, and I started playing an instrument. Seeing my dad always up there on the podium, I always thought, ‘I wanna do what he does — I wanna be a band director.’”

During his time in the Golden Eagles Marching Band, Jeff played at several significant events for the school, including homecomings and War for the Wheel rivalry games between the Southeast Redhawks and Southern Illinois Salukis. He said the Semo/SIU rivalry goes beyond the football teams, and each marching band would play short tunes at the other band in between downs.

Jeff also marched at several NFL football games, including the last football game in the old Busch Stadium between the Dallas Cowboys and St. Louis Cardinals in 1987.

This will be the first year Dalton will get to march at a SEMO football game, since last year’s sporting events were cancelled due to the pandemic. He performed at a pep band event and also was able to march for parents and friends at a Semo event. Dalton believes if he met his dad for the first time as marching band members today, it would be a quick friendship.

“We think a lot alike; if we were in the same unit, then we would definitely be friends,” Dalton said. “We also kind of have the same hairstyle — well, not now, but he used to have really long hair, and I’ve kind of got that same look going on right now.”

Jeff had advice for Dalton regarding his remaining time at Southeast before he graduates.

“Don’t stress out about the little things, and do the things you’re supposed to do,” Jeff said. “Get the job done, ya know. Get your degree — get out there so you can start teaching.”

Dalton also addressed how thankful he is to father and for the impact they had on his life.

“I would thank him because without him being the band director when I was in high school and growing up, I may not have even [been in band], but now, I love that part of my life,” Dalton said. “He really supported me — both him and my mom are supportive of everything I do, and I just want to thank him for doing that for me.”

Dalton will perform at his first college football game Sept. 2 when the Redhawks take on the Salukis.