A history of the War for the Wheel 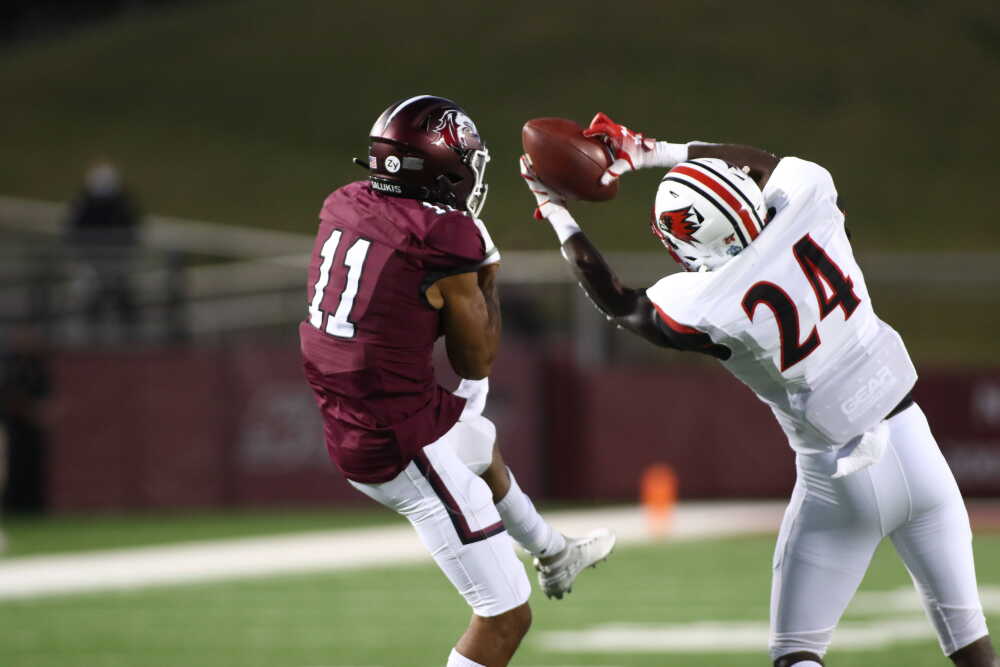 Graduate Student Shabari Davis intercepts a pass in the first quarter of the 20-17 loss to Southern Illinois on Oct. 30, 2020 at Saluki Stadium in Carbondale, Ill.
Photo courtesy of SIU Athletics

Just 45 miles and a river separate Southeast Missouri State University (SEMO) and Southern Illinois University (SIU), but they are connected by more than 100 years of football rivalry.

In the series that has been dubbed the “War for the Wheel,” SEMO and SIU compete in a non-conference game for bragging rights and the opportunity to take an authentic ship’s wheel back to their university. The wheel represents a piece of the history of the schools’ rivalry: according to the Southeast Missouri State University website, when the series began in 1913, the teams had to cross the Mississippi River by boat. One year, the ship carrying the SIU football team to Cape Girardeau sank, forcing the players to swim to shore.

A century later, that story inspired a new tradition that fosters excitement, competition and an experience unique to the Southeast community.

“It always seems like this game is circled on the calendar,” said Jeff Honza, assistant director of athletics for strategic communications at Southeast. “It’s the longest rival for both schools in the history of their football programs.”

The passing of the wheel began in 2018 when the matchup was officially titled, and Honza said the physical trophy has only increased anticipation for the game among players, coaches and fans alike, since.

“It’s made it more competitive, just knowing that you get to have something to symbolize winning that game,” Honza said. “It’s that extra incentive, like, ‘Hey, we’ve got to keep this thing on our side of the river.’”

The increased sense of competition that accompanied the wheel was echoed by 2019 SEMO football alumnus Bud Hilburn.

The game is not a part of conference play for either university, but Hilburn said bringing home the win in the first War for the Wheel built the team’s confidence that year.

“That was probably one of the most special games because it came down to the fourth quarter, and we finally pulled it off,” Hilburn said of the initial game. “I don’t know that if we would have lost that game, if we would have had the season that we had that year.”

By the end of the 2018 season, the Redhawks won nine games and lost four.

SEMO football head coach Tom Matukewicz also recalled the atmosphere after the team’s win at the beginning of the 2018 season.

“It looked like you were at a freaking mosh pit party with the lights on. It was as much joy as you could possibly imagine,” Matukewicz said. “That was a huge turning point in our program.”

Matukewicz said in the eyes of the players and coaches, this rivalry is no different from rivalries between larger schools.

“This is our big game, this is our everything,” Matukewicz said. “The wheel itself is just a symbol of everything else. We talk about winning this game year-round.”

Adam Criblez, professor of history and faculty athletics representative, said the rivalry itself is unique because it crosses state lines but retains the feeling of an in-state rivalry.

“Many of these students were recruited by both SIU and Southeast. For them, it’s not only about Southeast beating SIU, it’s about them competing against people that they’ve known for years,” Criblez said. “It has a special meaning that goes beyond just the institutions — it’s a very personal experience.”

He said the history of the rivalry plays a special role in getting the full Southeast experience — students get to connect with other students and alumni while cheering on their team and can continue to be proud alumni after they graduate.

Southeast’s competition with Southern Illinois has also made history as the first college football game to be played at Busch Stadium in St. Louis in 2013.

“It was surreal to see all of these enthusiastic Southeast fans and to realize that Southeast has a reach beyond just Cape Girardeau,” Criblez said. “There were thousands of alumni from St. Louis and areas that don’t typically come down to Cape, and they were there to cheer on the Redhawks.”