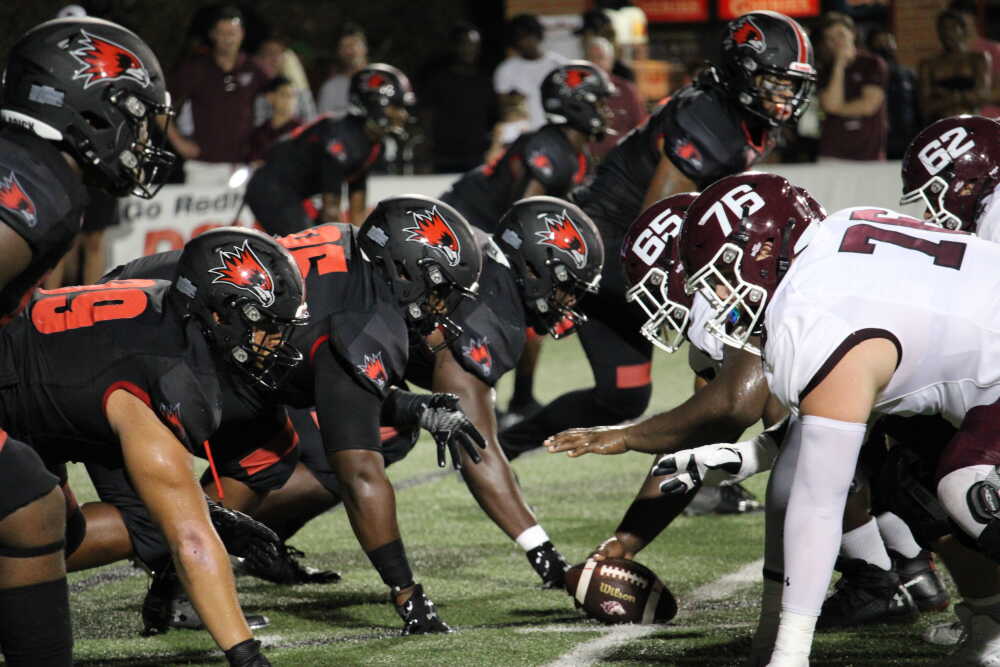 The Redhawks defensive line gets set pre-snap during Southeast's 47-21 loss to Southern Illinois on Sept.2 at Houck Stadium in Cape Girardeau, MO
Photo by Alyssa Lunsford

A slow first half both offensively and defensively proved costly as the Redhawks fell to the Southern Illinois Salukis 47-21 in the War for the Wheel, allowing the Salukis to keep the wheel for the second straight season.

The Salukis opened the scoring just under four minutes into the game when sophomore quarterback Nic Baker connected with junior wide receiver Avante Cox for a 99-yard touchdown on Southern’s first play from scrimmage.

The Salukis would go on to score the game's next 31 points and Southeast coach Tom Matukewicz said a big factor was mental errors the Redhawks made.

“It doesn’t feel like a lot of our problems aren’t correctable,” Matukewicz said. “I felt like we did a lot of things to ourselves so hopefully we can get that figured out.”

“[These] three games are gonna be tough, I think we’re gonna learn from them, and then I think at the end of the day we’ll end up with a solid football team,” Matukewicz said.

Ogbonna’s first career game with the Redhawks saw him complete 9-of-19 passes for 47 yards and one touchdown.

Southeast junior quarterback Christian Perez played the fourth quarter for the Redhawks and completed 4-of-6 passes for 54 yards and one touchdown.

Matukewicz said he felt that Southern Illinois won the line of scrimmage which made things difficult for Ogbonna.

“I don’t know that you could evaluate the quarterback on some of them because there’s just so much pressure,” Matukewicz said.

Senior running back Geno Hess said he liked the way both Perez and Ogbonna competed at the quarterback position in the loss.

“I have much respect [for them] and I feel like it’s only up from here with either of them,” Hess said.

The Redhawks were called for 15 penalties in the game and Matukewicz said they committed penalties they have to learn from.

Geno Hess led the way on the ground for the Redhawks rushing for 104 yards on 18 carries.

The Redhawks will be back in action on Sept. 11 when they travel to Huntsville, Texas to take on the Sam Houston Bearkats.