Fans experience reduced seating, confusion during War for the Wheel 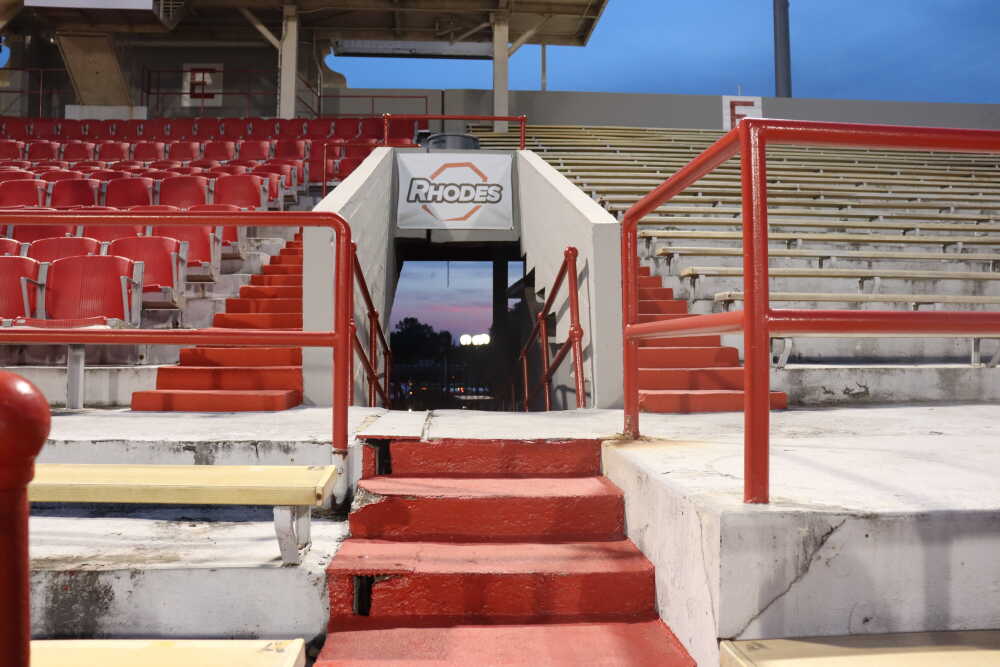 A Sept. 2 photo during the War for the Wheel football game shows empty seating on the south side of the stadium. The 91-year-old seating sections were recently closed due to structural safety concerns. Photo by Kailyn Veach.

As fans arrived at the aging Houck Stadium Thursday evening for the annual War for the Wheel football game, a glaring silence echoed through the southside bleachers. The grandstand section — usually designated for Redhawks fans — remained anything but rowdy through the nearly three-and-a-half-hour game.

“Why did they wait until now, the day before the football season started, to tell everybody?” attendee Linda Crump said. “I probably would not have been a booster this year, had I known.”

In an email sent to the Southeast community at 8 p.m. on Wednesday, Sept. 1, university President Carlos Vargas and Athletics director Brady Barke stated the south grandstand of the 91-year-old stadium would be closed for the fall 2021 season. Reduced seating capacity in north sections would be available for fans of both opposing and home teams.

Vargas and Barke cited safety concerns as the reason for closing the “deteriorating” south sections, according to the email.

Crump’s son played for the Redhawks for five years; she said she was excited to enjoy the season after empty stadiums during previous semesters due to COVID-19. To avoid any issues in limited seating capacity after the Wednesday announcement, Crump purchased season tickets to ensure admission to future games.

Gameday ticket sales associate Claire Harris said 80 walk-up tickets were available for Thursday night’s rivalry; by 5 p.m. that evening, she said an estimated 40 of those tickets were sold. Tickets available for online presale and student admittance were not included in this amount.

Houck Stadium has a seating capacity of 10,000 individuals, according to the Southeast Redhawks’ website. The north side bleacher seating was constructed before the 1963 season; in contrast, the original stadium, with only south seating, was constructed in 1930 for $150,000. In today’s dollars, the original construction of the south bleachers would cost an estimated $2,394,763.

Some students arrived early to the historic War for the Wheel game to avoid ticketing issues. Free with a student ID, student admission to football games is available only at the gate and not eligible for presale.

“We got here super early, because we were like, ‘What if we couldn’t get here in time, and they stopped letting people in?’” student Layla Summer said.

Attendees were not allowed to enter through the main south entrance; buses and golf carts shuttled fans from parking areas near Houck Field House to the gates, located behind Kent Library.

A little after 7 p.m., following the game start at 6:30 p.m., coordinator of ticket sales TJ Bartels said tickets were completely sold out. Southeast students MaKenna Mette, Chloe Sherer and Christine Curvey were among others turned away at the gate after the stadium reached capacity limits.

The group stated they hadn’t seen the email until Thursday morning, similar to others who said they saw the email late or not at all.

“I thought it was ridiculous that they would send it out literally the day of, especially when people make plans. If they had these problems with the stadium, they should have told students beforehand,” Curvey said. “We literally had a whole summer when they could have been doing this.”

Sherer said the group planned to meet students from SIU at the game, but were unable to enter the stadium.

Some inside the stadium noted the appearance of the southside bleachers, visible from the standing-room-only north seating section.

For some students in attendance, the Wednesday announcement minimally affected their gameday experience. Southeast marching band flute player Olivia Ross said while there were a few differences in direction and location of the performance, the marching band quickly adapted.

“We’re used to making sudden changes — it’s just part of being in band,” she said.

The Sept. 1 press release stated a new stadium seating structure is projected to be constructed by the fall 2022 season.