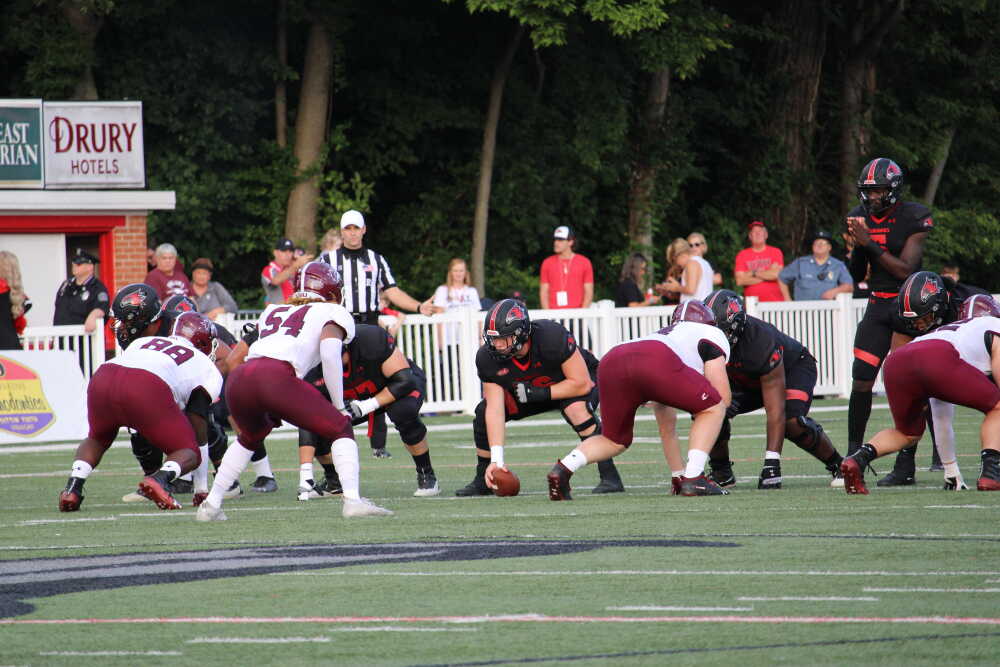 SEMO Football's offensive line gets set pre-snap during their 47-21 loss to Southern Illinois on Sept. 2 at Houck Stadium in Cape Girardeau.
Photo by Alyssa Lunsford

Senior offensive lineman Jaden Rosenthall looks to be a staple for the Redhawks offense for the upcoming football season. After a 4-4 season during the 2020-2021 season, the Redhawks look to climb the rankings in the Ohio Valley Conference (OVC) in hopes to be the frontrunners in their division.

“It means a lot to me,” Rosenthall said. “Putting in work since I’ve been here in Spring 2019 and getting to get that recognition is really rewarding.”

Rosenthall said the team has put a large amount of time and effort into preparing for the upcoming season.

“We’ve been working hard on and off the field and watching extra film,” Rosenthall said. “We have to play together, play violent and play physical.”

Rosenthall’s talents have not gone unnoticed by the Redhawks coaching staff, as offensive coordinator Jeromy McDowell said Rosenthall’s consistency is a huge part of the offense's success.

“Some of these guys have been in and out of the position up front,” McDowell said. “But Jaden shows up every day and is ready to work hard and do what it takes to lead the line group, and we're definitely thankful that he’s a Redhawk.”

“He’s one of those guys a lot of the guys look up to and listen to,” Bassett said. “I think he’s got a really good demeanor and charisma about him that brings people close to him. What he brings to this team from a leadership and experience standpoint is much more valuable than all the tools and gifts he has.”

Bassett also said how the offensive line as a whole has been improving on becoming more detail-oriented. He said the players want to be physical and set the tone, but they need to continue to be as detail-oriented as possible.

Rosenthall shares the same mentality as his offensive line coach when it comes to execution on the line and understanding his role during the game.

“We are the protectors of our offense,” Rosenthall said. “Everyone looks at us to get the job done. We put the offense and defense on our back when things get rough. We just put our hands forward and don't get our heads down. We just keep pushing.”

Rosenthall, along with his fellow lineman, said their main focus this season is to “lead the way.”

Rosenthall and the Redhawks look to bounce back from a Week 1 loss as they travel to Houston, Texas to play Sam Houston State on Saturday, September 11. Game time starts at 6:00 p.m.