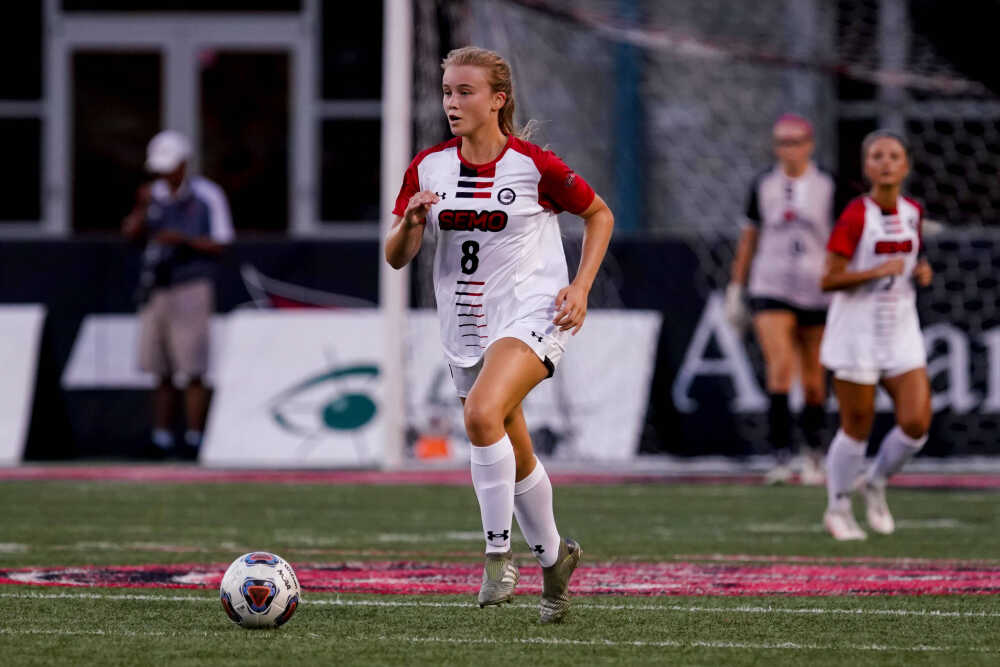 Anne-Clara Couturier dribbles the ball up the field during Southeast's 4-1 win over Maryville on Aug. 22 at Houck Stadium in Cape Girardeau.
Photo submitted by Southeast Missouri Athletics

“She’s quick, and she can finish,” Southeast soccer coach Heather Nelson said of sophomore midfielder/forward Anne-Clara Couturier when referring to her ability to impact Southeast soccer offensively. Couturier is a transfer from Southeastern University, a NAIA school in Lakeland, Fla. During the 2020-21 season, she was named the Sun Conference Freshman of the Year and named to the Second Team All-Sun Conference.

Couturier tallied eight goals and one assist in 16 games for Southeastern. In her first four games with the Redhawks, Couturier has scored two goals, both coming on Aug. 22 in a 4-1 win over Maryville University.

Couturier said she has noticed differences early in her first season at the Division I level.

“The physicality is different here,” Couturier said. “It’s faster here and everything, and I like the team spirit here.”

Couturier was born in Rouyn-Noranda, Quebec, in Canada, where she said the main sport people play is hockey. Couturier said her soccer career began when her dad put her in it when she was four or five years old.

“I moved to Montreal at 13 to go play there because my city was really, really small, and [people played] mostly hockey,” Couturier said.

Freddy Moojen, a professional indoor soccer player who also runs a development camp in Montreal, said the year spent at Southeastern was good for Couturier as it helped her adapt to living in America, going to school, and training.

“Life is different [in the U.S.],” Moojen said. “You have to train everyday, [and] you have to go to school. The game is more physical, most of the teams are stronger on the fitness level; they train a lot in the gym in the spring, especially.”

Nelson said most of the time when a player is in their first season at the Division I level, it involves a process of becoming a more complete player.

“A complete player means how quickly you transition into attack or defense,” Nelson said. “For Anne, she transitions really quickly into attack, but to be complete, she actually has to transition into defense, and her improving on that will help us win the ball back earlier and ideally further up the field.”

Couturier credits the move to Montreal as being key in her development as a player.

“I was playing against Montreal before, so I knew they [had] better training [and] more training,” Couturier said. “Being there was really, really good for me, and I was young enough to adapt quickly.”

Moojen said the first time he saw Couturier play, he knew she had the ability to play at the Division I level.

“I think she’s a smart player on the field, she has good technique, [and] she understands the game well,” Moojen said. “She’s not the most physical, defensive player, but because of her understanding of the game and her technical abilities, I think that helps her in her game. She knows how to be at the right place at the right time.”

Although Southeast has played just four games, Couturier said she finds herself adapting well and starting to do more of what the team is asking from her.

Couturier and the Redhawks are back in action Sept. 12 when they travel to Iowa City, Iowa, to take on the Iowa Hawkeyes.